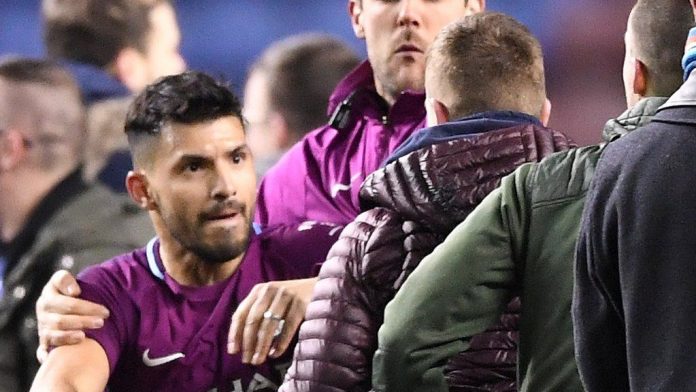 Wigan Athletic are to carry out a full investigation into the scenes that following last night’s victory over Manchester City in the FA Cup.

Following the final whistle some Wigan fans went onto the pitch to celebrate and appeared to be involved in an altercation with the Manchester City striker,Sergio Aguero.

However, shortly after, a small number of fans in the away end became aggressive and started damaging the advertising boards.

“Following Monday night’s enthralling victory over Manchester City in the Emirates FA Cup, the club were disappointed to see supporters encroach the pitch at the final whistle.”

Chief Executive Jonathan Jackson commented: “Whilst we appreciate that the vast majority of supporters who ran on to the pitch did so spontaneously to celebrate a famous victory, we were disappointed with the action of a minority of supporters who acted in an inappropriate manner. Player and staff safety is of paramount importance and we will conduct a full investigation.

“However, it is important to not let the actions of a few supporters detract from an incredible night at the DW Stadium. A special atmosphere was created by both sets of supporters and the match was yet another memorable day in the history of Wigan Athletic.”

Greater Manchester Police confirmed that two people were arrested on suspicion of affray following an incident outside the ground and remain in custody.

No injuries have been reported and GMP are working with Wigan Athletic to establish the full circumstances around this incident.

Chief Superintendent Stuart Ellison of GMP’s Territorial Commander for Wigan, said: “Football is a family event and the disruption that players and fans alike faced last night, will not be tolerated.

“As soon as people were on the pitch, we immediately deployed our resources to the front of the stands, where they were able to keep the two groups of supporters apart and prevent any further disruption.

“Our officers met with the club and other partners ahead of the match to carry out a full risk assessment, which ensured we had the appropriate resources for the number of people attending.

“Emotions always run high at football matches, and sometimes, this means that officers have to intervene to ensure the safety of the fans.

“We have made two arrests but as our investigation into last night’s disruption continues, I’d ask anyone with information about the incident to please come forward.”