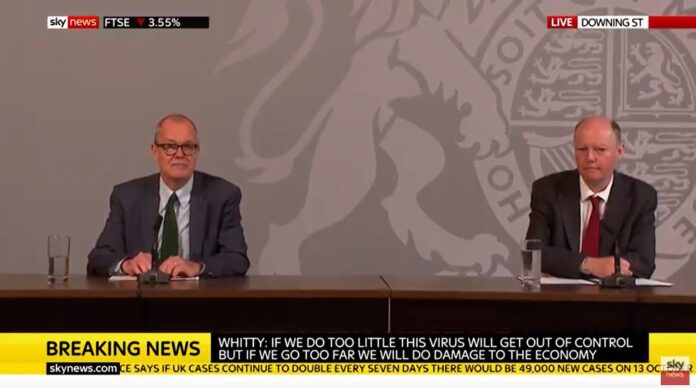 At the briefing at 11.00am Prof Whitty will be joined by the government’s chief scientific adviser Sir Patrick Vallance, to present the latest data.

Prof Whitty is expected to say: “The trend in the UK is heading in the wrong direction and we are at a critical point in the pandemic.

We are looking at the data to see how to manage the spread of the virus ahead of a very challenging winter period.”

It comes as this morning’s Times reports that Britain faces a further six months of “very difficult” lockdown restrictions, as Boris Johnson prepares the country for fresh measures to combat the latest increase in infections.

Boris Johnson is expected to give Britain one final chance to prove it can follow the rules and suppress a second wave when he is expected to address the nation this week.

The Prime Minister is expected to threaten curfews on pubs and bans on households socialising if the public does not follow strict self-isolation and social distancing rules.

Sir Patrick Vallance begins by looking at Europe using France and Spain which started in young people by has spread across age groups, increase in hospitalisations and regrettably deaths

He says that in England from July the rate of infection has been across all age groups.It is not due to increased testing he adds.Roughly 70,000 have the Covid infection and around 6000 a day are adding to the figures

The epidemic he says is doubling every seven days and in one scenario by mid October, there could be 50,000 cases per day which four weeks later could translate to 200 deaths per day.

He finishes by saying that around 8% of the population have had the virus, judging by antibody tests.But that means most people are not protected.

Since the beginning of September the number of impatient Covid patients has been doubling.At this point he says the seasons are against us.He says this is a six month critical period.There is no evidence that this is a milder virus

Seasonal flu normally kills round 7,000 people a year. But this virus is more virulent, he adds.He says treatments have got better. But that will not be enough to keep deaths at a minimal level.

Sir Patrick Vallance finishes the press conference by saying that the UK has put itself in a good position for vaccine supply.It is possible that some vaccine could be available in small amounts later this year.But it is more likely that a vaccine will be available early next year – although that is not guaranteed, he says.