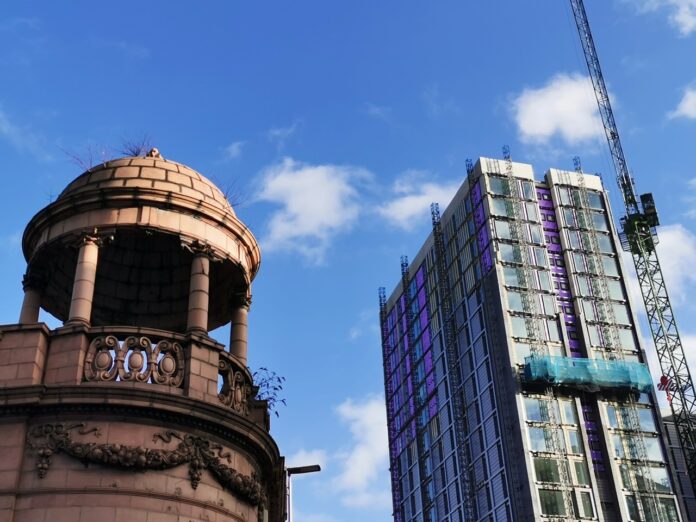 A group of distinguished economists including Professor Diane Coyle of Cambridge University and Bloomberg’s Stephanie Flanders have said that the Government’s Northern levelling up agenda will only be effective if it supports people employed in the sectors hardest hit by the Covid-19 crisis and helps to improve people’s health and well being.

The Government has signalled it will focus on major infrastructure projects as it attempts to rebalance the UK economy and the reviewers conclude that Greater Manchester has world class sectors that can accelerate economic growth with substantial and long term innovation funding from Government.  However, they also make clear the North’s health and skills inequalities must also be addressed if the country is to be truly levelled up.

This analysis is set out in an update to the Greater Manchester Independent Prosperity Review issued in response to the coronavirus pandemic, including new analysis from the Resolution Foundation. The report was also co-authored by Harvard Professor Ed Glaeser, EY’s Government and Public Sector lead Darra Singh, Professor Henry Overman of LSE, and Professor Mariana Mazzucato of UCL.

Mayor of Greater Manchester Andy Burnham said: “This report makes for difficult reading, but it confirms what we always feared: that the coronavirus pandemic has ruthlessly exploited the inequalities in our society, hitting the poorest hardest.

“We know that the UK is one of the most politically centralised and regionally unequal countries in the developed world. This should be a moment of clarity for all of us, and an opportunity to address these deep-seated disparities by doing things differently.

“It’s essential that we build back in a way that makes us more resilient to the challenges of the future – that means sustainable infrastructure and investment, properly integrated health and social care services, and access to high quality education, training, jobs, and housing. In Greater Manchester our unique devolution deal puts us in the perfect position to look at these things in the round, and determine the kind of action we need – not only to shore up our defences, but to really level up in a way that benefits our people and places.

“We need a Government spending review and devolution white paper that delivers substantial devolution of power and resources – otherwise levelling up will be nothing more than a slogan.”

The leading economists identified growing evidence that the Covid-19 pandemic has amplified existing economic inequalities between North and South, against a backdrop of highly centralised decision-making and significant regional disparities.  Over the last decade, Greater Manchester has seen larger growth in lower paying sectors, such as retail, hospitality and leisure, which have been hardest hit by the Covid-19 crisis.

There is also a call for further devolution to local areas so they can put a greater focus on re-training and upskilling to prevent a lost generation of young people. Given the threat of unemployment on a grand scale, they recommend more powers to allow local areas to design and test innovative local policies and programmes which directly respond to the needs of their residents and local economy.  Greater Manchester has already set out ambitions to expand conversion courses that would allow thousands of young people to take up jobs in the green economy, such as construction and refitting of zero-carbon homes.  This is part of the city-region’s efforts to create a greener economy as it aims to become carbon neutral by 2038.  This ambition is highlighted as a path to recovery with the potential to be a global model for inclusive and sustainable economic growth.

Greater Manchester’s Good Employment Charter, which supports employers and employees to deliver higher pay and more secure work, is also highlighted as a way to enable businesses in these sectors to raise wages and productivity.

The Covid-19 crisis has brought the issue of health inequalities to the fore.  In Greater Manchester and across the UK, more deprived areas have been affected by the virus much more than affluent areas.  Many people in lower paid jobs have often been unable to afford to self-isolate or work from home. Analysis of UK productivity has rarely made the link between health and the economy, but the Independent Prosperity Review makes clear that that linkage – and the importance of physical and mental health – could not be more important in today’s health-precipitated global economic crisis.  In the Reviewer’s report, the economists have set out their belief that, building on Greater Manchester’s health and care devolution deal, the need to reform the social care system is now clear and closer integration between social care and the NHS is key to building the UK’s resilience and capacity to deal with future pandemics.

Independent Prosperity Review Chair, Professor Diane Coyle, said: “The pandemic has laid painfully bare some of the frailties and vulnerabilities of the UK’s economic model, at least since the financial crisis. What the reviewers all agreed, however, is that there is potential to take the opportunity of needing to do things significantly differently to ‘build back better’, and to begin investing in a future far more resilient to the inevitable shocks ahead of us.

“This determination to seize the opportunity fits well with the UK government’s commitments to ‘level up’ – within, as well as between different places – and to continue building on the foundations that a more devolved and decentralised approach to evidence-based decision-making have begun to introduce. Levelling up will require investment, along with a greater role for city regions, in improving employment and skills programmes, and in addressing health inequalities; it is not only a question of investment in infrastructure and R&D.”

GMCA Portfolio Lead for the Economy, Cllr Elise Wilson said: “This report comes at a pivotal moment for the economies of Greater Manchester, the wider North and the whole UK.  The Government has stated its ambition to level our country up and this will be vital as we recover from Covid – but as this report makes clear, it will only succeed if people feel the benefits as well.

“This report from a group of globally renowned economists should make policy makers in Whitehall sit up and listen.  The opportunity is there to build back greener and better but we now need Government to give us the tools to do it.”

Independent Prosperity Review Panel member, Stephanie Flanders, said: “The big takeaway is that we need to resist the urge to promote recovery at any cost. If the city-region is to build back better and for the long term it will need to pursue socially and environmentally sustainable growth, developing new initiatives and accelerating existing programmes, including the Greater Manchester Employment Charter and updated social value framework.

“Out of the horror of the Covid-19 pandemic, policy makers have an even greater responsibility to seize the opportunity to use new tools and to think differently about the future shape of the economy. One way to start doing this would be to tie membership of Greater Manchester’s Good Employment Charter more closely to the public procurement process, so organisations receiving contracts must demonstrate their social value.”

“While there’s no denying there will be challenging times ahead, we mustn’t lose sight of the considerable successes Greater Manchester has achieved in recent years, which have put the region in a strong position to ‘build back better’. Greater Manchester now continues to punch above its weight as the most diverse city region economy in the UK, with the most developed institutional capacity outside London.

“The Purchasing Managers’ Index (PMI) surveys show that the North West of England (the lowest geography available) performed very strongly from 2016 to mid-2019 and consistently outperformed many other regions of the UK. Business start-up rates have flourished in recent years, growing by 14% in 2018, a rate higher than all other regions of the UK outside of London. This is an excellent indicator of how patient capital targeted at Northern businesses and decarbonisation – which we have argued for in response to the crisis– could prove especially effective at stimulating recovery.

“These figures show just a small part of the transformational progress Greater Manchester has made in recent years. Moving forwards, innovative solutions and ambitious planning, such as the local industrial strategy, alongside more devolved powers to local leaders, will be key to unlocking the region’s true economic potential and boosting productivity.”

“IPPR North’s work has shown that even before the outbreak of Covid-19, the UK had a health divide larger than any comparable country- with rates of mortality in places like Blackpool, Manchester and Hull that are worse than parts of Turkey, Slovakia and Romania.

“So we at IPPR North particularly welcome the emphasis that today’s report places improving on investment in peoples’ health to build future economic resilience. The Government must now start listening to places like Greater Manchester because the economic and social recovery from Covid-19 will only be built on the foundations of investment in local public health teams which, as we’ve seen during this crisis, are well placed to respond quickly and effectively to the needs of their communities”.

You can read the full report here

We slowly move towards the Smart Motorway