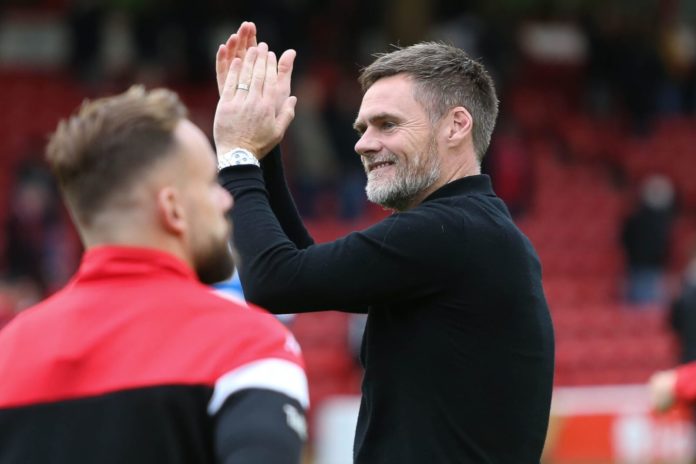 Wigan Athletic manager Paul Cook expressed his disappointment for Latics’ travelling supporters as his side lost 1-0 at Sheffield Wednesday on Saturday afternoon.

Latics started well at Hillsborough and had chances to both lead and then equalise following the game’s only goal from Massimo Luongo and Cook was frustrated at the fine margins that prevented his side following up Tuesday night’s win over Birmingham City with a result.

“It is disappointing,” Cook said. “Especially for our travelling fans as well. I don’t know how everyone else viewed it, but I didn’t think there was anything in the game and we have possibly had the better chances in the game.

Rochdale manager Brian Barry-Murphy was pleased with the reaction shown by his side in the second-half of Saturday’s game at AFC Wimbledon.

The Dons were 3-0 up inside the opening 30 minutes and carried the lead into the break.But Dale responded twice through Ian Henderson and had further clear chances to, at least, tie the game.

Dale manager Barry-Murphy said: “I was pretty confident that through the second-half, when we were at our best, we could end up getting something from the game.The chances we created through our attacking play deserved that.”

Salford City picked up a first win on the road in the EFL after a dominant performance at The Banks’s Stadium yielded a 3-0 win against in-form Walsall.

Luke Armstrong and Jake Jervis scored their first goals for the club before Ibou Touray scored an unstoppable shot to complete the victory.

Walsall’s four-game winning streak came to an end with a whimper as Kyle Letheren was equal to all the hosts could throw at him; the best opportunity for Josh Gordon being kept out by the Welshman.

For the Ammies though it’s a much-welcomed third win of the season and manager Graham Alexander was delighted for the players.

“There’s things we can always improve on but it’s a performance that gave great credit to the players’ mentality.

“We played really well in spells, we managed our game much better at times, we had good quality up front across those positions to create the chances and take the chances, and a clean sheet is always welcome.

Oldham Athletic Head Coach remained upbeat after seeing his side record a 1-1 draw at home to an in-form Cheltenham side.

Filipe Morais put Latics ahead in the opening stages with the Robins grabbing their equaliser midway through the second-half in a game where either side could have and should have won.

“It was a tough afternoon. Probably, if we took our chances we would’ve won the game. Physically we tired a little bit later on and is something we need to work on.