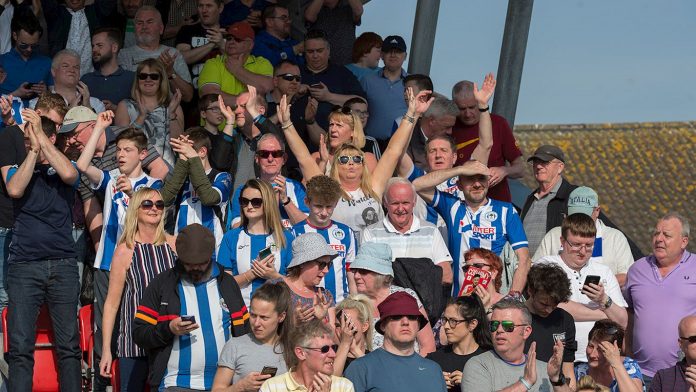 Wigan Athletic are back in the Sky Bet Championship following 4-0 victory over Fleetwood Town.

Goals from Max Power, Gavin Massey, Dan Burn and Chey Dunkley helped Paul Cook’s side to a 4-0 victory over Fleetwood Town at Highbury Stadium, and with Shrewsbury Town failing to defeat already relegated Bury, Latics sealed their place back in the second tier.

At the other end of the table, Rochdale are still in the relegation zone after being denied all three points after a 90th minute Bradford City equaliser in a 1-1 draw at the Crown Oil Arena.

Matty Done gave Dale a deserved lead four minutes before the interval, and it looked to be enough to secure the win.

However, Charlie Wyke equalised in the final minute of normal time, turning home after Josh Lillis spilt a high cross into the area.

“I don’t think there’s an awful lot wrong with what we’re doing at the football club and the strategies that we are going with, but individual mistakes have cost us at key times and have affected results which have seen us draw too many games. The losing margin is relatively the same as what it was last season, but we should have at least won eight of the 16 games that we’ve drawn.

Oldham are just a point outside the drop zone after they came from behind twice but had to settle for a point in a 2-2 draw with AFC Wimbledon. Duckens Nazon fired two second half efforts to equalise twice.

Jonathan Meades converted from close range to give the Dons a half time lead.Oldham were level  five minutes after the break. Nazon fired home at the back post to equalise, however, against the run of play, AFC Wimbledon were back ahead.Joe Pigott fired into an empty goal to fire the Dons in front for a second time but Latics were deservedly level five minutes later.

Bury did Wigan a favour, the already relegated club coming from a goal behind at Shrewsbury to take a point from the promotion chasers, thanks to a second half goal from Jay O’Shea.

Barry Douglas opened the scoring for the visitors early on before Benik Afobe calmly slotted away the second.

Further goals came from Diogo Jota and Conor Coady to seal the victory for Nuno Espirito Santo’s side.

They face a crucial six pointer against Burton Albion next Saturday, a win would guarantee Phil Parkinson’s team Championship football next season