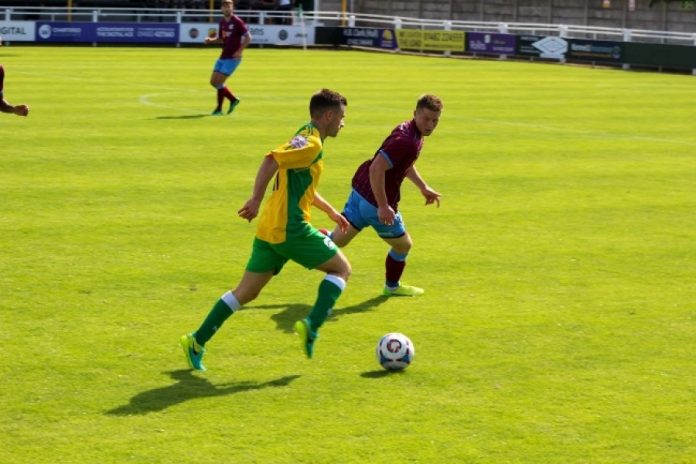 Curzon Ashton sit top of the first Conference North table after a 4-0 victory over North Ferriby at the Tameside Stadium.

Two goals in the first seven minutes from Max Leonard put Curzon in the driving seat, Niall Cummins made it three just after the break and the visitors were reduced to ten men with a quarter of an hour left whenMark Gray was sent-off for a foul on Paul Marshall before Matthew Crothers completed the scoring on 86 minutes with a powerful low shot from the corner of the penalty area.

However it wasn’t the best of starts for the region’s other sides in the division.

Salford City went down to a 2-0 home defeat to Darlington in front of over 1,700 spectators at Moor Lane, two goals from David Ferguson, the second coming in the fifth minute of injury time seeing the Ammies going down to their first opening day defeat since 2011.

Stockport County went down to a 1-0 defeat at newly promoted Spennymore Town, their first losing start to a campaign in three years, and a first League defeat since going down at Kidderminster during late February.

David Foley’s after 41 minutes was the difference between the two teams although the Hatters had a great chance to level with eighteen minutes left as Matty Warburton’s penalty was saved.

FC United were also on the losing side on their travels to Northamptonshire, Armson putting Brackley in front just after the break,FC drew level through Jason Gilchrist after seventy four minutes but parity was short lived as within three minutes Brackley were back in front as debutant Andy Brown headed in Shane Byrne’s neat cross.