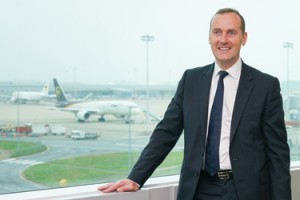 Andrew Cowan will take on the role, replacing Ken O’Toole, who has been named CEO of London Stansted Airport.

Meanwhile, Collette Roche has been named Chief of Staff for MAG, which will give her responsibility for shaping the development of the Group’s strategy and leading some of the key corporate functions.

During that time Collette oversaw the launch of direct flights to San Francisco and Muscat, as well as marking the airport’s busiest day in its 79 year history.

For Andrew Cowan, it will be his second spell at the helm of the UK’s third busiest airport. He was group Chief Operating Officer and Manchester Airport MD between 2013 and 2015.

In 2015 he spent a year as Chief Strategy Officer for the group, including chairing the newly established MAG USA business.  Prior to MAG, Andrew was Group Chief Executive of Robertson Group, and a director at United Utilities.

Andrew will join Manchester Airport as CEO at a time when the airport has never been busier. He will oversee the start of construction on the £1bn Manchester Airport Transformation Programme (MANTP), which will provide the UK’s third biggest airport with a world-class terminal facility to allow it to make use of its two full-length runways. Andrew will be charged with cementing the airport’s position as the UK’s global gateway in the North and will draw on his expertise from the infrastructure and construction sector before he joined MAG.

Andrew is also well known in the North West business community, having held roles including chair of BITC North West.

Andrew Cowan said: “After a successful spell at London Stansted where I have overseen massive growth and the launch of its transformation programme, I am looking forward to returning to Manchester Airport, which is about to embark on one of its biggest developments in its eight decade history.

“With unrivalled growth and the continued addition of key long haul destinations, Manchester Airport is UK’s global gateway in the North and now is an exciting time to be part of that journey.”

Collette Roche said: “After several months running the UK’s third biggest airport where I have overseen several significant milestones, I am looking forward to the challenge of my new role, which will see me make a difference across all of our airports and international businesses.”

In her new role, Collette will retain her position as a board member of the Northern Powerhouse Partnership.

Charlie Cornish, Chief Executive, MAG, said: “Both Ken and Andrew have demonstrated they are first class airport leaders during their career as MAG. I am pleased to have appointed them as the new CEOs of London Stansted and Manchester respectively.

I know that they will develop their airports further as they play an even bigger role providing the global connectivity and runway capacity that this country needs in the coming years. Both airports are also about to embark on significant periods of development, and Ken and Andrew are the right people to lead them during this critical time.

“I’d like to thank Collette Roche for stepping in to lead Manchester Airport over the last few months. In her new role as Chief of Staff, she will play a vital role not just at Manchester and London Stansted but across the MAG business here and abroad.”

The changes will come into effect in September.