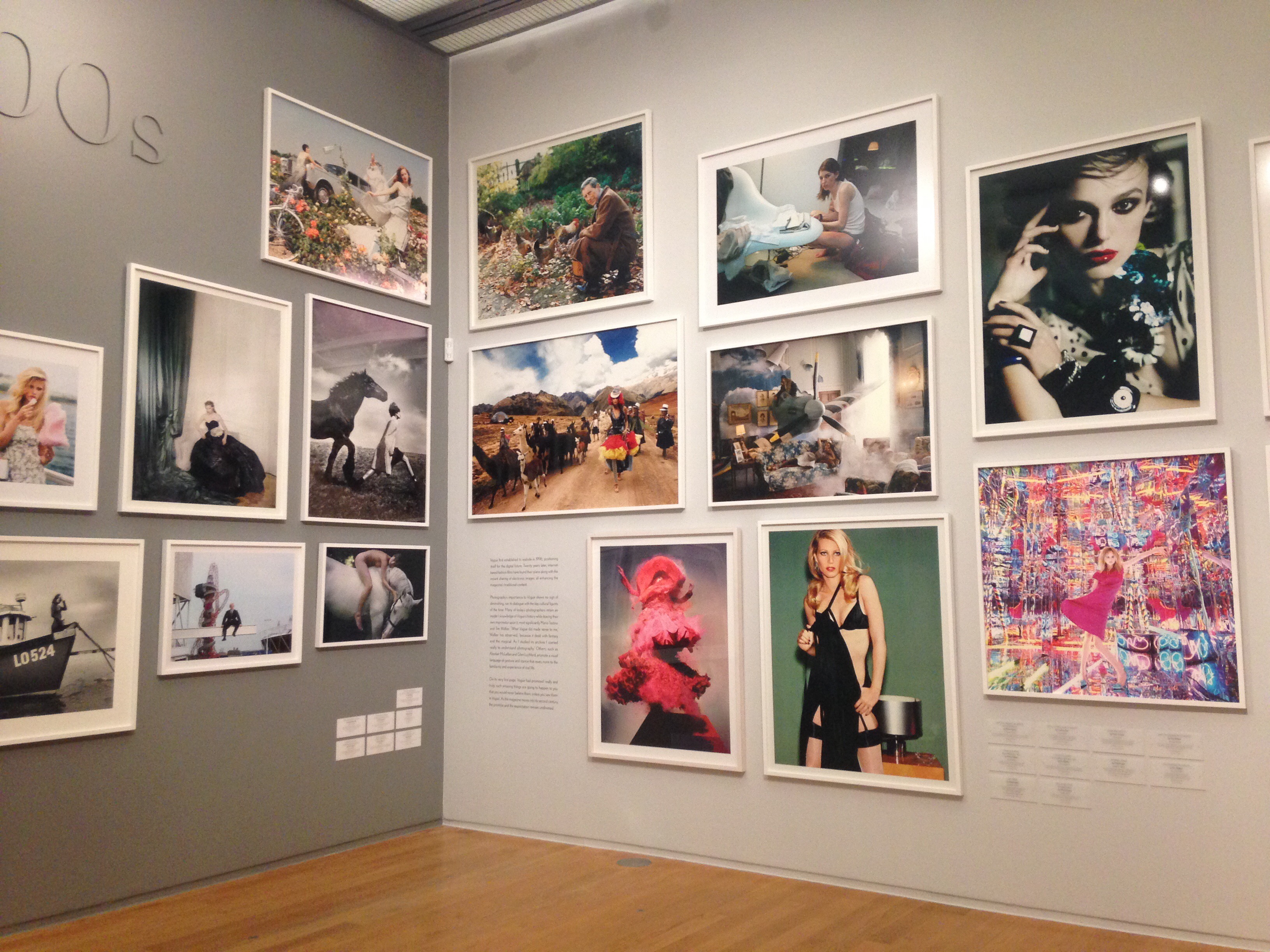 Born during the chaos of the First World War, the magazine Vogue celebrated its hundredth anniversary earlier this year and an exhibition showcasing 280 modern and vintage prints from its vast archive, fresh from the National Portrait gallery has arrived in Manchester-we took a look.

One hundred years of British culture laid out in front of us says Maria Balshaw, Director of Manchester’s Art Gallery and here it is on the top floor of the gallery extension, a showcase of a nations cultural history, political history and a portrait of how we see ourselves.

It’s laid out in reverse chronological order, starting in the naughties, The Duchess of Cambridge who featured on the anniversary edition and on the opposite wall,Tim Walker’s photos, unusually he still shoots only in film and rejects photoshop and the like,here is the hurricane airplane crashing through the wall of the living room.

All the photos are originals, brought together over five painstaking years.One of the earliest, Baron Afolphe De Meyer taken in 1919. The baron is now recognised as the first professionsl fashion photographer , Delores, his subject, the first named model.

Which brings us to the 1990’s, the rise of the supermodel, Vogue was there at the beginning photographing Naomi, Cindy,Linda,Tatjana and Christy together on its January 1990 cover.

Victoria and David Beckham are conjoined in the service area of Manchester’s Malmaison Hotel, the stacks of laundry behind. Hugh Grant on the set of Four weddings and a funeral, Heath Ledger, and Corrine Days set of Kate Moss, the Cocky kid from Croydon as he termed here

We have the colourful opulent Paris based eighties, watched over in by a picture of Margaret Thatcher, captured by David Bailey she was said to be an avid reader of the magazine.
Then the 1970’s, the decade when the magazine could afford to send its photographers around the world.Norman Parkinson’s space between sea and sun taken on location in Barbados, vies with Helmut Newton’s Limelight Nights with fashion editor Grace Coddington floating serenely in a St Tropez swimming pool.
But often accused of being behind the times, Vogue was quick to latch onto the Punk revolution and here we have its photo montage of images from Derek Jarman’s film Jubilee.

The sixties hide around the corner, not all swirling colours as you may have preconceived but a wall of monochrome portraits, this was the era of David Bailey, but the establishment fought back, Cecil Beaton’s imposing composition  of David Hockney working on a double portrait of Christopher Isherwood and Don Bachardy. 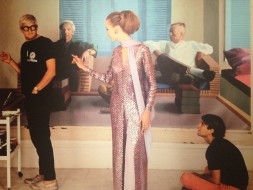 The 1950’s meanwhile are a blossom of colour reflecting the optimism of the decade, here is the first picture taken for the magazine by  a certain Anthony Armstrong Jones, still working for the magazine today.

And then the most surprising decade the war years, when Vogue established its identity? while other magazines shut, it was seen as a boost to moral and was given more paper

It found a star in Lee Miller, she who was embedded with the Anerican army and followed them as they battled into Germany, often in front of them, she captured Berchtesgaden in flames minutes after the SS had fled, first into Dachau and Belsen and captured the suicide of a young women in a Red Cross armband as the Allies closed in.

But here also is Cecil Beaton’s extraordinary photo of a young bomber crew going into their plane, their images captured as if walking to the gallows at a time when their lifespan could be measured in days or even hours.

We go further back in time, the glorious twilight, the optimism and decadence of a decade that would soon be lost.

And our favourite, the oldest original photo found from November 1916, five months after the magazine was launched, discovered and acquired on EBay for a few pounds.

It is of Viscountess Maidstone, the heiress to a Philadelphia Banking fortune who married into the British aristocracy.