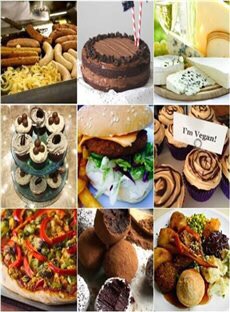 Over 3,500 people attended the Northern Vegan Festival last year, and it now returns to 5 venues in Manchester city centre on Saturday April 23, for its first joint event with the national charity, Viva

This year visitors can browse more than 200 stalls in Sachas Hotel and the Methodist Church across the road, including more than 10 caterers offering vegan versions of Indian, Malaysian, Turkish, Mexican, Caribbean and British foods.

Go to a free entry vegan beer, wine and cider festival at the nearby Thirsty Scholar vegetarian/vegan food pub.

Take their dogs to a free entry vegan dog food tasting event in the nearby Castle pub and collect free samples of vegan cat food from the nearby Gullivers pub.

Attend more than 15 talks and cookery demonstrations in Sachas Hotel and the Methodist Church.Go to see vegan musicians in the evening in the Castle and Gullivers pubs.

The festival is expecting not only thousands of vegetarians and vegans to attend but also hundreds of omnivores, as interest in a meat free diet is rapidly growing throughout the UK.

Roddy Hanson, founder and co-organiser of the Northern Vegan Festival:

“This will be our biggest and best festival yet. Veganism is now so mainstream that it is extremely easy to be vegan. It is also affordable, healthy and enjoyable and our festival will promote this.”

“We are absolutely thrilled that Viva! is partnering with the Northern Vegan Festival to spread the vegan message across Britain. Together we will be a vegan tour de force! Our joint Shows will attract thousands of people from Manchester and beyond, positively helping people save animals, the planet and their health and discover a whole new world of food! NVF is fun – a celebration of vegan living. Come along and try the delicious vegan food. You never know you may just love it!” says Juliet Gellatley, founder & director, Viva!

Explore the illustrated world of Nick Sharratt with interactive exhibition