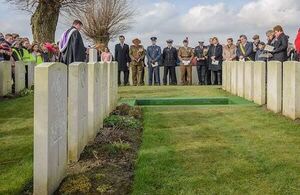 A funeral service was held for three unknown soldiers who enlisted into The Lancashire Fusiliers, the New Zealand (NZ) Infantry and of an unknown regiment at Perth Cemetery (China Wall) near Ypres, Belgium.
The service, organised by the MOD’s Joint Casualty and Compassionate Centre (JCCC), part of Defence Business Services was conducted by Reverend Chris Kellock, Chaplain 1st Battalion The Royal Regiment of Fusiliers.
The service was supported by The Royal Regiment of Fusiliers and by staff from the New Zealand Embassy. In attendance were delegates from both British and New Zealand Defence, regimental representatives and local dignitaries.

Three sets of remains were discovered near Zonnebeke in December 2012 and accompanying military insignia indicated the casualties were World War 1 soldiers of The Lancashire Fusiliers and NZ Infantry; no identifying insignia accompanied the third soldier. Despite extensive research, the JCCC was unable to identify the casualties and they will be buried as ‘Soldiers of the Great War known unto God’.

Headstones for the unknown soldiers have been provided by the Commonwealth War Graves Commission (CWGC), who will now care for their final resting place in perpetuity.