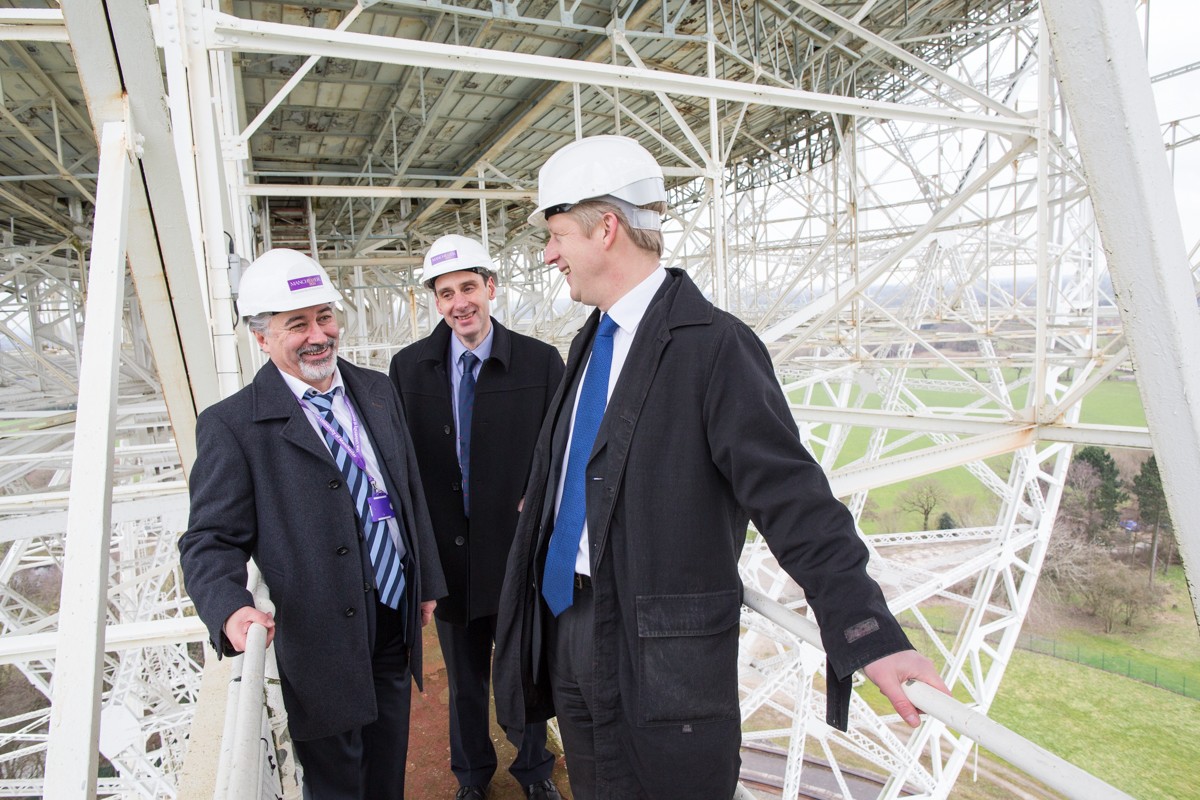 Minister of State for Universities, Science, Research and Innovation, Jo Johnson MP, learnt more about the UK’s role in cutting-edge space exploration yesterday as he toured The University of Manchester’s Jodrell Bank Observatory and the international headquarters of the Square Kilometre Array, the project to build the world’s largest radio telescope.

Mr Johnson was in Cheshire as the Government announced a new £10 million scheme to incentivise the commercial spaceflight market and to see the ways in which the UK is leading international astronomical research, by meeting with scientists at Jodrell Bank working on the UK’s e-MERLIN telescope and the Square Kilometre Array.

As part of the tour Mr Johnson climbed the giant Lovell Telescope, an icon of UK science and engineering and one of the biggest and most powerful radio telescopes in the world. Jodrell Bank has been at the forefront of world radio astronomy for over 70 years and is now on the UK shortlist for UNESCO World Heritage Site status.

As well as important scientific research, the site is also home to a Discovery Centre which attracts 165,000 visitors each year, including 22,000 school pupils on educational visits. The Centre organises a range of public events including the bluedot festival of science, music and culture.

Following his tour, Mr Johnson met for discussions with the University’s President and Vice-Chancellor, Professor Dame Nancy Rothwell, and received an update on the progress of the SKA project.

The Minister was received by SKA Director-General Professor Philip Diamond as well as senior members of the SKA leadership team and the Science and Technology Facilities Council (STFC). He was briefed on the current status of the project, including the ongoing negotiations to establish the SKA as an intergovernmental organisation, and was shown the plans for the new SKA Global Headquarters on site, whose construction is due to start in the next few weeks.

“It is our intention for the SKA headquarters to become a real nexus for big data radio-astronomy internationally, with top scientists coming here from around the world to collaborate on cutting-edge astronomical research using the SKA. This will be in large part possible thanks to the strong commitment the UK Government has continuously shown for the project” declared Professor Diamond.

Universities and Science Minister Jo Johnson said: “We want our world-leading science sector to continue to flourish, which is why we made science, research and innovation one of the key pillars of our Industrial Strategy.

“We are committed to the international SKA Project and proud to be hosting what will be its global headquarters at Jodrell Bank. It will welcome world-class scientists and engineers to work on cutting-edge international collaborations to better understand our Universe.”