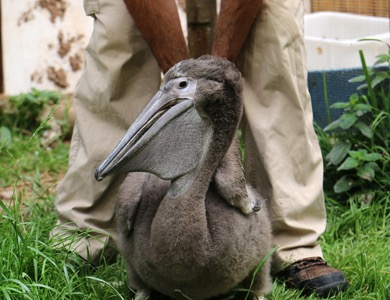 The first Eastern White Pelican ever to be hand reared in the UK is about the fly the ‘artificial’ nest to join his pelican friends.
Charlie the chick, who hatched at Blackpool Zoo just hours before Princess Charlotte was born in May, is leaving the bird nursery he has grown up in and is being gradually introduced to the flock.
He is the first of his species to hatch in the UK since 2008 after his egg was removed from his parent’s nest to protect it from foxes and other predators.
Expert keepers have been caring for him round the clock, with onsite staff checking on him throughout the night.
His routine included a diet rich in all the nutrients he needed as well as daily 30 minute UV exposure session to help bone growth.
Weighing in at just 132g at birth, Charlie has now blossomed to a huge 5kg and is about to start the process of spending the daytime in a purpose built pen at Pelican Beach where he can see the zoo’s other nine pelicans.
Once keepers are confident he will integrate into the group they will slowly introduce him.
Johnpaul Houston, Assistant Head Keeper at Blackpool Zoo, said: “I am absolutely delighted to confirm we have successfully hand reared an Eastern White Pelican for the first time in the UK.

“Eastern White Pelicans are so rarely bred in the UK, with only an eight per cent fertility rate.
“It is the first time an Eastern White Pelican chick has hatched in the UK since 2008, the last one, called Cyril, was the country’s first and still lives here at Blackpool Zoo.
“I would like to thank the entire team, who have all worked tirelessly to ensure the survival of Charlie. We are all really excited to see him in the flock where he belongs but we will certainly miss seeing him in the nursery every morning!”
Eastern White Pelicans are the second largest species of pelican in the world and originate from southeast Europe, Asia and Africa. When adult sized, the birds have pure white feathers and their wingspan can grow to around 12 feet.

Thousands of British Pathé news reels are released on YouTube