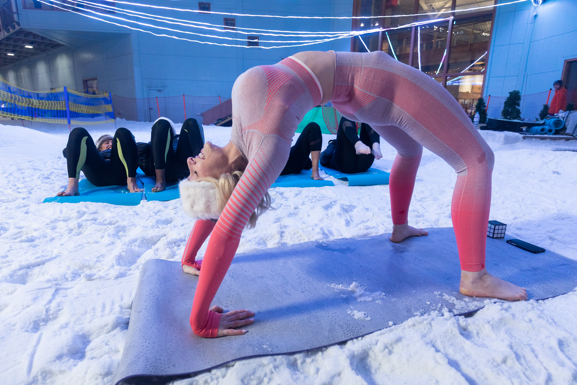 T’S time to ditch your traditional yoga workout for one that will really make you chill out, as Chill Factore launches the UK’s first Snow-ga class.

Swapping sun for snow salutations Snow-ga is the yogi’s answer to combining cold temperatures with downward dog and warrior poses.

This latest incarnation of yoga is performed in sub-zero temperatures and is a new global trend, especially popular in New York.

Cooler temperatures also focus the mind through breathing and meditation, distracting from the chilly atmosphere.

Yoga instructor Gemma Merna, who is no stranger to cold temperatures having appeared on Channel 4’s The Jump, said: “Yoga offers so many benefits for your body, mind, and emotional state, and it only increases over time. Practicing cold yoga means you have to focus twice as hard on your body’s movements and breathing, establishing a deeper mind-body connection, and ultimately leading to a feeling of total wellbeing.”

The Snow-ga session was devised by Chill Factore to work on flexibility, balance, range of motion, agility and overall strength.

Morwenna Angove, CEO at Chill Factore, said: “We’re thrilled to have created a UK-first by holding a real Snow-ga class– it’s definitely made for an interesting and zen-like addition to our already extensive list of snow offerings.”

The team was put through its Snow-ga paces as Gemma glided between ‘snow-side crow’ and ‘slope-ward facing dog’ against the snowy backdrop.

Liana Leota, Manchester Thunder elite athlete said: “I thoroughly enjoyed the change of pace practicing yoga in a colder environment. If you’re looking to optimise performance, it makes a whole lot of sense to hit cold temperatures for a yoga session. It was reassuring to know that class will help recover from hard training sessions, particularly as we’re nearing the end of the season.”

Situated at BEYOND, Chill Factore is the UK’s longest indoor real snow slope and the ultimate leisure destination for family fun days out, professional ski and snowboarding practice and everything in between. To find out more and register interest in Snow-ga class, simply email snowga@chillfactore.com

The Many Benefits of Electric Motorbikes

Taking frequent Saunas is good for your health