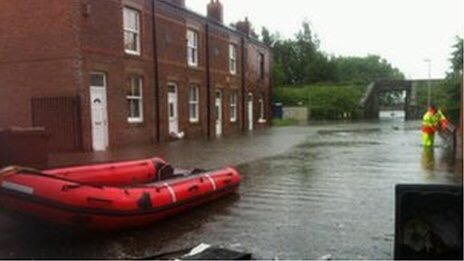 With impeding climatic changes due to Global Warming, Britain needs to change how it adapts to flooding in the coming years, according to a Manchester Metropolitan University lecturer.

Researcher Dr Paul O’Hare will highlight the need for a better understanding of floods as one of a handful of experts at ‘Resilience 14: Britain Under Water’.

Thousands of homes were ruined during last winter’s storms as many rivers burst their banks, causing millions of pounds of damage.

“The threat of flooding is substantial, and is only likely to be exacerbated in the coming years,” said Dr O’Hare, lecturer in Geography and Development.

“Countering the effects of flooding will be no easy task given the technical and social complexities of contemporary flood risk management.
“In short, we need to rethink how we adapt to flooding. Resilience 14 will offer an opportunity to meet and discuss these issues, and to get a taste of the latest innovation in this field.”

The conference is led by The Building Research Establishment (BRE), a former government body and now a private organisation, to explore the latest thinking from government, academia and the commercial sector. It takes place on November 26, at BRE in Watford.