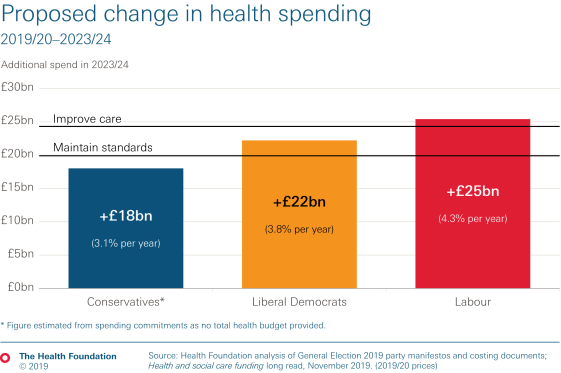 A survey conducted by Ipsos MORI on behalf of the Health Foundation indicates that there is increasing public support for paying more tax to maintain and improve health and social care. The public also highlight a lack of investment in the NHS and long waiting times as the top issues facing the health service, followed by concerns around an insufficient and overworked workforce.

Today’s survey of nearly 2,000 people shows that over two thirds (67%) favour an increase in taxes to maintain current levels of NHS care, up from 64% in May 2017 and 59% in March 2015. Only 13% think spending on other services should be reduced to maintain current levels of NHS care. In addition, 62% say that if the government decided to increase spending on social care, this should be funded through some form of tax increase, up from 51% in May 2018*. Only 11% think funding increases for social care should come from cuts to other services.

The findings come as the nation considers the different approaches to tax and spending presented by the political parties as part of their election campaigns. The Health Foundation, an independent charity, has analysed how the main parties’ funding pledges measure against what is needed for health and social care (see charts in Notes to Editors for detail).

The survey also reveals that public support for a tax-funded NHS, free at the point of use and providing comprehensive care for all citizens, is growing (72% agree strongly with this principle, compared to 66% in May 2017 and 60% in March 2015), as is a preference for NHS funded care to be delivered directly by the NHS (60%), as opposed to by the private (11%) or non-profit (1%) sectors.

The survey also reveals the latest public opinions about how the UK’s departure from the EU will affect the NHS. Remaining in the EU is seen as the least-worst option for the NHS when compared to a No Deal Brexit or leaving the EU with the government’s new deal. Only around 1 in 10 people think leaving the EU without a deal (10%) or with the government’s new deal (11%) would have a positive impact on the NHS. In contrast, 42% think leaving with the government’s new deal would impact negatively on the NHS, while 53% think the impact of a No Deal Brexit would be negative. This compares to around a third of people (31%) who think remaining in the EU would have a positive impact for the NHS, while 55% think it would make no difference and 14% think it would have a negative impact.

When discussing the impact of Brexit on the NHS, of the 57% who highlight at least one negative possible impact, the most frequent concerns are: staffing shortfalls caused by EU doctors and nurses leaving the UK (30%); a shortage of medicines and other supplies (27%); and increased prices of medicines and other supplies (25%). Of the 31% who highlight at least one positive impact from Brexit, the factors most commonly cited are: more funding for the NHS (16%); less health tourism (12%); and fewer people using the NHS if EU citizens return home (10%).

‘The public report unwavering support for the NHS and growing dissatisfaction with the unfairness of the social care system in England. People recognise that high-quality health and social care comes with a price tag and there is growing preference for tax increases as the best way to meet that cost rather than cutting back other services. While the three main parties’ funding pledges for the NHS and social care mean big differences in what the public can expect from these services over the next 5 years, investment in the NHS can’t continue to be at the expense of other public services, not least because these also affect our health.

‘People are clearly now recognising the deep unfairness in how social care support for older people works and are increasingly dissatisfied. In stark contrast to the NHS, publicly funded social care is only provided free to those with the greatest need and lowest means, leaving too many others no choice but to sell their homes to pay for care. The public is strongly against this – which is yet another warning that the issue can no longer be dodged as previous governments have done. A new government should do the right thing and act fast.

‘The survey also highlights the depth of public unease about how Brexit will affect the NHS. People need more information and reassurance to address their concerns about staffing shortages and the supply and cost of medications.’

Have safe are your medicines

A “tsunami of unmet need” warning for social care