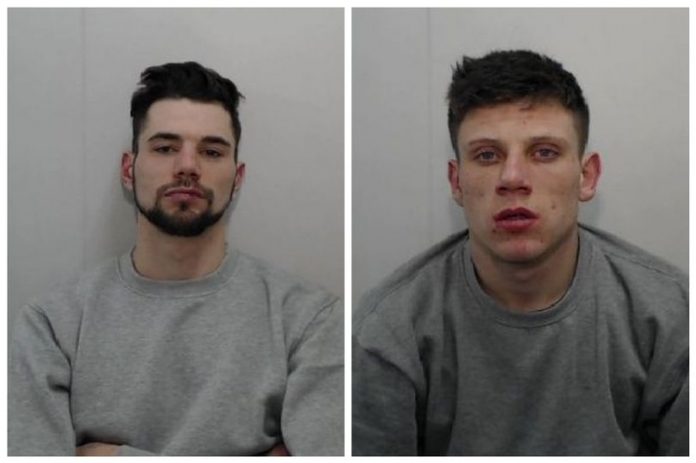 Warren Birkett aged 26 of Cypress Road, Droylsden and Jack Wimbleton aged 24 of New Islington, Ancoats, have today been sentenced to 14 years in prison after being found guilty of two counts of robbery.

In the early hours of New Year’s Day 2018, Birkett and Wimbleton forced their way into a property on Foynes Close in Manchester as a mother and her four young children were sleeping.

As the pair crept upstairs, the mother woke up and saw Wimbleton on the landing carrying a hammer and wearing sunglasses in an apparent attempt to disguise his identity.

Spotting him about to walk into the room where her young children were sleeping, the woman ran out and pleaded with him not to go in. At this point she also noticed Birkett standing on the landing with a crowbar in hand.

Birkett then walked towards her and held the crowbar to the woman’s face and threatened her before punching her to the ground as she attempted to stop him entering her bedroom.

The two offenders then searched the room for valuables and took a PS4, an iPad and a mobile phone that had all been bought as Christmas presents.

Birkett and Wimbleton would strike again, this time targeting a takeaway delivery driver on Iron Street in Ancoats on Saturday 13 January .

The man had just dropped food off and was walking to his car when he was approached by the two offenders wearing balaclavas and demanding money. When he refused, he was thrown to the floor where one of the men began choking him as the other rummaged through his pockets.

After the victim threw his wallet under the car in an attempt to prevent them stealing it, Wimbleton held him down as Birkett kicked him in the face and body.

They then stole his jacket, fleece, wallet and mobile phone and ran off before returning a short time later and attempting to steal the victim’s car but were unable to start the vehicle.

The pair fled the scene as police arrived but were arrested hours later at a nearby address.

Detective Sergeant Louise Edwards, of GMP’s City of Manchester Division, said: “Birkett and Wimbleton are violent offenders whose greed ultimately caught up with them and resulted in their arrest.

“They were prepared to use force to get what they wanted and even sunk as low as knowingly assaulting a mother as her children slept in the next room.

“I hope it will bring their victims some comfort to know that they have been brought to justice.”

65 year old man in hospital with serious injuries after being hit by an...