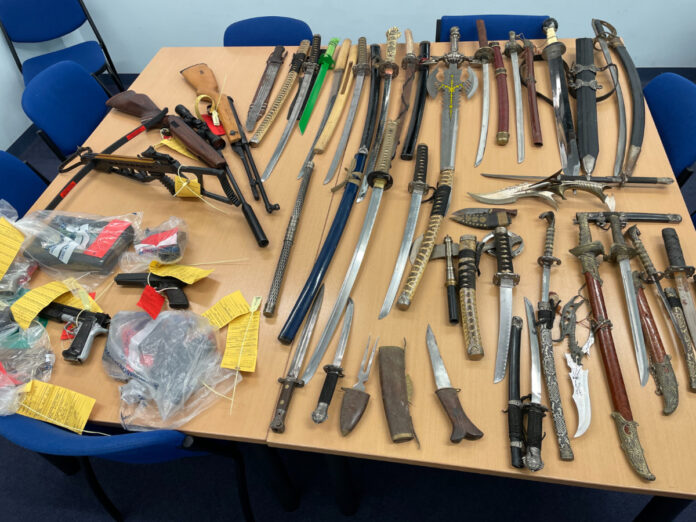 Two men have been arrested and dozens of weapons seized from a house in Prestwich by officers dedicated to GMP’s operation to tackle organised crime in Salford.

Around 45 weapons, including bladed weapons, imitation firearms and a crossbow, were recovered during a house search in the Rainsough area on Sunday afternoon.

Patrols from Operation Naseby – GMP’s dedicated operation into tackling serious and organised crime in Salford – were driving through the Swinton area on Sunday 3 January when they stopped a vehicle suspected of being involved in class A drug supply.

A 54-year-old man was arrested on suspicion of possession with intent to supply class A drugs.

A subsequent house search in the Rainsough area of Prestwich was conducted and numerous weapons were recovered, 32 swords and knives; 12 imitation firearms; and a crossbow.

A second man – aged 55 – was also arrested on suspicion of possession with intent to supply class A drugs.

Both men have been questioned by officers and released pending further enquiries.

Forensic examinations of all the items recovered by police are underway.