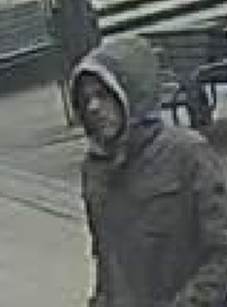 Police have issued an image of a man they would like to speak to in connection with an assault on a 78-year-old man in Radcliffe town centre last month .

At around 9:30am on Thursday 21 March the pensioner was shopping in Boots Pharmacy on Blackburn Street when he spotted a man and a woman attempting to shoplift. He tried to intervene to stop the offenders, but he was thrown to the ground and viciously kicked in the face.

The victim suffered numerous facial injuries including cuts and bruises on his nose, two black eyes and swelling to his face. He required hospital treatment for his injuries and was incredibly shaken by the incident.

The first offender is described as a white man, around 6ft 2in tall and of slim build. He was wearing a black coat, dark trousers and dark trainers.

The second offender is described as a white woman, around 5ft 2in tall and of slim build. She was wearing a khaki green coat, pink and purple trainers and spoke with a Manchester accent.

Officers have released an image of a man they would like to speak to in connection with this incident.

Chief Inspector Phil Spurgeon, of GMP’s Bury district, said: “This was a brutal attack on an honest member of the public who was only trying to do what he believed was the right thing.

“We’re doing everything we can to trace those responsible, and now I’m appealing for the public’s help.

“I appreciate the image is not the best quality, but if you recognise this man or think you have any information about this incident then please get in touch with police as soon as possible.”

Information can be passed on anonymously by calling the independent charity Crimestoppers on 0800 555 111.