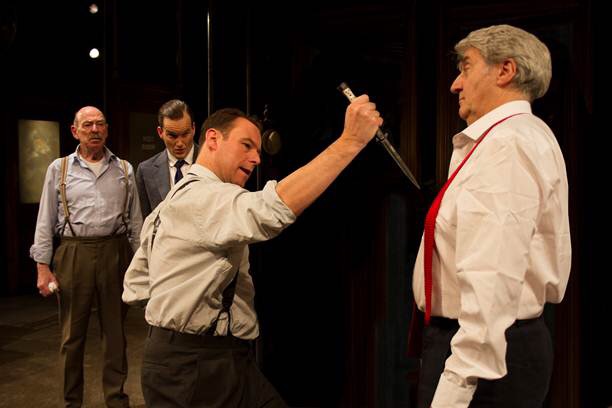 Following huge critical acclaim and sold-out performances, Bill Kenwright’s production of Twelve Angry Men extended its run at the Garrick Theatre three times. Tom Conti starred as Juror number 8, the role made famous by Henry Fonda, and he is reprising this role for the UK tour.

Tom Conti is one of the most respected and celebrated actors of his generation. Unforgettable as the leading man in hit films such as Merry Christmas Mr Lawrence and Shirley Valentine, he has also appeared as myriad different characters on both the big and small screens as well as on stage. Recent movies include The Dark Knight Rises and Street Dance. Awards include an Olivier Award and a Tony Award for his stage performance in Whose Life is it Anyway? and a Best Actor Oscar nomination for his role in Reuben Reuben. He and Dame Judi Dench were recently jointly voted the Most Popular Actors in the West End in the last 25 years.

Lauded as one of the great ‘must-see’ movies of all time, Reginald Rose’s Twelve Angry Menoriginated as a television play and has been successfully adapted for film, radio and stage. The 1957 Academy Award nominated film version starred and was produced by Henry Fonda. This production is directed by Christopher Haydon and designed by Michael Pavelka.

Twelve Angry Men follows twelve jurors who have murder on their minds and a life in their hands as they decide the fate of a young delinquent accused of killing his father. But what appears to be an open and shut case soon becomes a dilemma for the twelve, as their prejudices and preconceived ideas about the accused, the trial and each other turn the tables every which way, until the nail-biting climax.