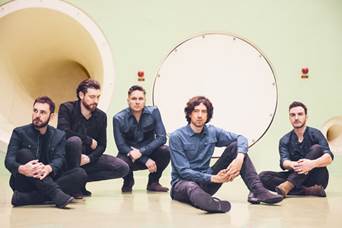 This morning, Snow Patrol confirms 8 headlining dates in the UK and Ireland throughout December and January including a date at Manchester Arena.

Snow Patrol’s album Wildness, their first album in seven years, is out now. Wildness taps into something raw and primitive.

Lead-singer and songwriter Gary Lightbody says of the album: “There are many types of wildness, but I think it can be distilled into two: the wildness of the modern age, all its confusion, illogic and alienation and a more ancient wildness. Something primal, alive and beautiful that speaks to our true connectivity, our passion, our love, our communion with nature and each other. This is the kind of wildness the album is centered around. The loss of it. Trying to reconnect with it. To remember it.”

Snow Patrol recently returned to “Later… With Jools Holland” where they debuted a live rendition of “Empress,” along with performances of “Life On Earth,” “Heal Me,” and “Chasing Cars.” This weekend the band played BBC Radio’s Biggest Weekend in Coventry. Snow Patrol also appeared as musical guests on The Late Show with Stephen Colbert on April 19th and The Late Late Show With James Corden on April 24th and performed “Don’t Give In,” the first single from Wildness.

Snow Patrol has launched a Spotify playlister website where fans around the world can create their own playlist of Snow Patrol songs throughout the band’s catalogue and share these playlists with a friend. When sharing the playlist, the fan marks his/her location as well as the recipient’s location on a global map. Check it out and create your own playlist at http://playlist.snowpatrol.com

After their Fallen Empires tour ended in 2012, band members —which also include multi-instrumentalist Johnny McDaid, guitarist Nathan Connolly, bassist Paul Wilson, and drummer Jonny Quinn — decided to take a step back from the band, and focus on their own projects. Gary Lightbody continued his work with his Tired Pony side project with members of Belle and Sebastian, R.E.M, Reindeer Section and Fresh Young Fellows and moved to Los Angeles to begin writing songs for movies (including “This Is How You Walk On” for 2017’s Gifted), and doing a number of high-profile co-writes with Ed Sheeran, Taylor Swift, Biffy Clyro, and One Direction.

Taking this extended break from Snow Patrol proved to be a source of inspiration, and writing songs that were not pulled directly from his own psyche helped heal what Lightbody considered to be not so much writer’s block as life block.

Tickets will go on sale on Friday, June 8th at 9am Local Time here.

Purchase Wildness on all formats here.