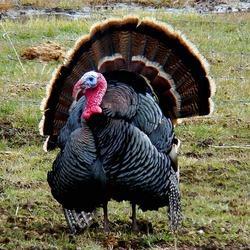 Did you know that the Turkey has been around for ten miilion years and there are fossils to prove it.The bird originates from Mexico, it was named a turkey by the early explorers because it resembled a bird that they had seen Turkish merchants parading around.

Turkey was also the first meal to be eaten on another celestial body, Neil Armstrong ate a turkey dinner on the moon.

The Turkey arrived in Europe during the early sixteenth century,it is said that Henry VIII created the precedent of eating one for Christmas, along with the usual Tudor fayre of boar’s head,pheasant,swan or peacock.

The popular story is that we owe the introduction of the turkey into England to William Strickland, who lived in East Yorkshire.It is said that Strickland acquired six turkeys by trading with Native Americans while on an early voyage to America in 1526.He brought the birds back and sold them in Bristol market for tuppence each.

Strickland is said to have continued in the turkey trade and is reputed to have made so much money that he was able to build a stately home in Boynton, near Bridlington.

Today we think of it as the staple of our Christmas dinner, yet go back two hundred years and it was a rarity.

For in mid Victorian times, the piece of resistance on the table was good old British beef, sirloin or roast. But fashion decreed a change, first it was goose,rich in protein and fairly reasonable in price.Goose clubs sprang up in many cities as a means whereby the meal could be paid for in advance, in instalments.

The Turkey began to come into fashion, partly due to Charles Dickens’ whose A Christmas Carol, published in 1843, seese Scrooge sends Bob Cratchit a massive turkey to replace his goose.But even then it was consumed mainly in the houses of the rich and prosperous, only as its price came down, driven by the arrival of the railways, did turkey really take off,as increased production and refrigeration made lower budget eating possible.

By the end of the nineteenth century around three quarters of a million were consumed, the majority bred in Britain.(Today that figure is 10 million) but even in the 1930’s it would cost more than a weeks wages( today the equivalent of tow hours) and it remained a luxury until at least the 1950’s.

It is estimated that around three quarters of families sit down to Turkey but among our European friends it is not a typical meal.

In Sweden, the  Christmas feast consists of a smorgasbord of caviar, shellfish, cooked and raw fish and cheeses and in Ukraine they prepare huge broths brimming with meat for Christmas Eve rather than Christmas day.

The Germans tend to have a game feast on Christmas day, usually wild boar or venison while Christmas dinner in Italy can last for more than 4 hours. Most families will have 7 or more courses including antipasti, a small portion of pasta, a roast meal, followed by 2 salads and 2 sweet puddings – then cheese fruit, brandy and chocolates.

In Austria, a typical Christmas dinner would consist of braised carp served with gingerbread and beer sauce and in Poland, the Christmas Eve supper consists of 12 non-meat dishes, representing the months of the year and featuring fish such as pike, herring and carp.

A History of Manchester’s Cremation Trends