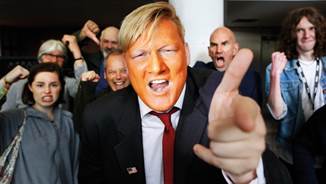 Following two sold-out runs at the Edinburgh Festival, Trumpageddon comes to Waterside, Sale, Trafford as part of its UK tour this January.

1,862,364 people signed a petition against Donald J. Trump making a state visit to the UK, so he’s doing a show around the UK instead!

Trumpageddon enjoyed a sell-out premiere in 2016, when The Donald was a mere candidate – and returned as leader of the free world for an acclaimed 2017 run. Now he’s back for a UK tour before heading to Australia for a month-long engagement at the Adelaide Fringe.

Immerse yourself in Trump’s world vision before he blows it to kingdom come. This absurdist satire is as demented, hysterical and disturbed as the man himself. As featured in The Guardian, The Scotsman, Sky News, STV and BBC World Service.

A Caribbean Bar is Coming to Altrincham