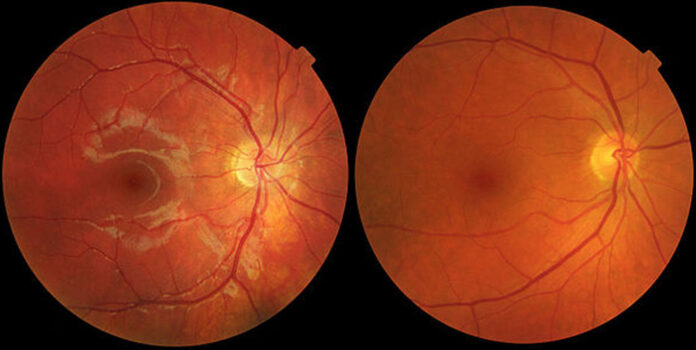 Scientists at The University of Manchester have taken an important step towards finding a treatment for age-related macular degeneration (AMD), the most common form of adult blindness in the developed world.

Publishing in the top journal PNAS and funded by the Macular Society, the researchers were able to identify early signs of the disease which could be targeted by new treatments before symptoms develop.

Scientists have long known that people with certain genes on chromosomes 1 and 10 have a 2-3-fold higher risk of developing AMD, although lifestyle factors also play a role.

The Manchester team identified higher numbers of ‘mast cells’ in the eyes of people when either of the risk genes were present, even when there were symptoms, suggesting an early mechanism in common.

They also showed the mast cells release enzymes in the back of the eye which then damage structures underneath the retina that in time is likely to damage the retina itself.

Mast cells exist in most tissues and are one of the immune system’s first defences against infection, especially parasitic disease and damage.

Scientists already know there are more mast cells in the choroid in people with established AMD. The current study, however, identified higher levels in people before the disease develops.

The genes on chromosome 1 are linked to a part of the immune system called the complement cascade, which is associated with a risk of AMD.

Though the functional role of genes expressed by chromosome 10 are not known, but increased risk of AMD is.

Dr Unwin said: “What is really exciting about this work is that we are studying tissue from people before they have signs of the disease.

“This gives us a look into the very earliest stages, and gives us hope that we can intervene to stop the disease developing and ultimately prevent loss of vision”

They identified those who are at risk of developing age-related macular degeneration based on their risk genes, and discovered underlying changes in the tissue of the otherwise healthy at-risk individuals.

They collected retinal tissue from the back of donor eyes post mortem, following removal of the cornea for transplantation.

Then they took a small sample from the macula – the part of the retina responsible for central vision – and removed the cells to leave a thin layer of membrane which supports the photoreceptors called rod and cone cells and is where disease begins.

They analysed the proteins present in the membrane from 30 people using mass spectrometry, which identifies protein components based on their mass, to find differences in the tissue make-up between those with and without genetic risk of AMD.

The mass spectrometry, identified a series of enzymes which are made almost exclusively by mast cells, a type of immune cell.

Examining tissue from a further 53 people, they observed higher levels of mast cells in patients with higher disease risk.

Dr Unwin added: “We next need to look at how mast cells are activated, and whether by preventing, or clearing mast cell activation we can slow or stop disease development.

“There are several researchers and companies looking at complement mediated-therapies for AMD and while these are promising for Chr1-related disease there is no evidence that they will have an effect on Chr10 disease.

Geraldine Hoad, the Macular Society’s research manager, said: “This is an exciting development and we look forward to seeing further research in this area. We know lots of current treatments for wet AMD don’t work for everyone and for those with dry AMD there is no treatment at all. Finding something that works for everyone would be an important piece of the puzzle and make a huge difference to the lives of those affected.

“While this particular study is in its early stages. it’s great to see the benefit of our investment in the Manchester Eye Tissue Repository, which is proving a vital resource for lots of research in this area.”