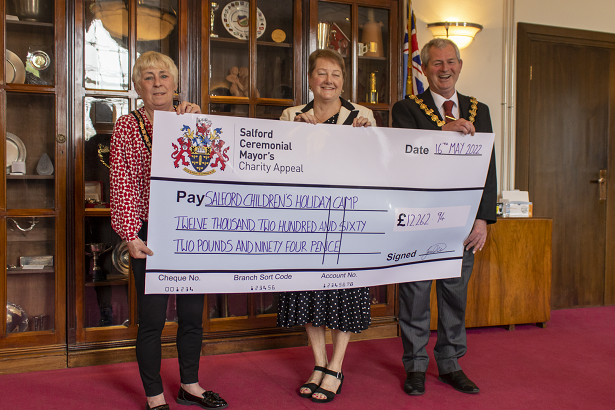 Three Salford charities have been given a funding boost thanks to the kindness of local residents and businesses.

The Andrew Cooke Music Award Trust and Memorial Fund, The Salfordian Trust which runs the Salfordian hotel and Salford Children’s Holiday Camp have all received just over £12,000 each.

The Andrew Cooke helps Salford children to buy and learn to play a musical instrument. The Salfordian Hotel has been providing residents and their carers with holiday breaks since 1963 while the Salford Children’s Holiday Camp was established in 1926 and has provided an affordable holiday for more than 80,000 children who might otherwise have missed out.

Councillor Mullen and his Mayoress, Mrs Michelle Mullen thanked everyone who has supported their charity appeal and said they were delighted with the amount raised.

“We’ve had a challenging year with pandemic restrictions but once again Salford has showed its true spirit and generosity.WeI know this money will be well spent on giving children and adults a lot of pleasure and, in the case of music lessons, new skills and maybe even a career,” said Councillor Mullen.

Councillor Mullen’s year as Ceremonial Mayor ends on Wednesday 18 May when Councillor Ann-Marie Humphreys will be sworn in for 2022 to 2023.

BELLE VUE are going flat-out for track glory by joining forces with HideOut!