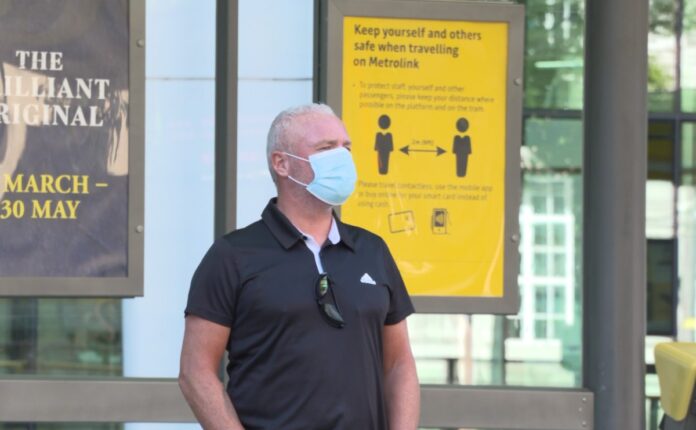 About Manchester has received many reports on crowded trams across our network with some passengers not wearing face coverings and failing to social distance.

Our most recent report was of a crowded tram between the City Centre and Ashton yesterday afternoon which the respondent described as rammed and with some passengers not wearing face coverings.

There have been many pictures on social media, one in particular being a travel safe officer slumped on a tram wearing his mask under his chin.

We took a trip ourselves between the City and Rochdale through Oldham and were shocked at some of the behaviour we witnessed.This was lunchtime and there were many school children embarking and disembarking in groups, many of them,despite being clearly over twelve not wearing masks and getting extraordinary close to other passengers.

During the early stages of the journey, three travel safe officials had been present on the tram but it surprised us that at the stop where many unmasked people got on, they decided to get off.

But it wasn’t just schoolchildren, the unmasked covered all ages, including one man walking up and down the carriage shouting loudly into a mobile phone, others wearing disposal masks which had seen better days and others with them around their necks or only covering their faces.

However what finally forced us to move seats was a snivelling,coughing teenager who wiped his nose with his hands and proceeded to clean them on one of the seats.

TfGM’s Head of Metrolink, Danny Vaughan, said: “We are using all the trams available to us, with two in every three operating as a ‘doubles’ to provide as much capacity as possible.

“We are starting to see more people use public transport and on Metrolink are carrying around half the people we did before lockdown.

“We are working hard with the operator to ensure all passengers and staff can travel safely, but unlike the wearing of face coverings, which can be enforced, Department for Transport (DfT) guidance states that suitable mitigations should be taken where social distancing of at least 1metre is not possible on public transport.

“We’ve all got a part to play to limit the spread of the virus. As well as running as many trams as possible, we have a thorough cleaning regime in place, have installed hand sanitiser at interchange stations and have information across the entire network reminding people how they can travel safely.

“For their part, I cannot emphasise enough to passengers the importance of wearing a face covering – unless exempt – carrying hand sanitiser and thinking about how and when they travel.”

We accept in part the comments but what do people do on crowded trams, wait for the next one and hope that it isn’t and where is the enforcement? During our journey the driver kept announcing that Metrolink would be clamping down and fining people who were not wearing face coverings-We wait to see what happens