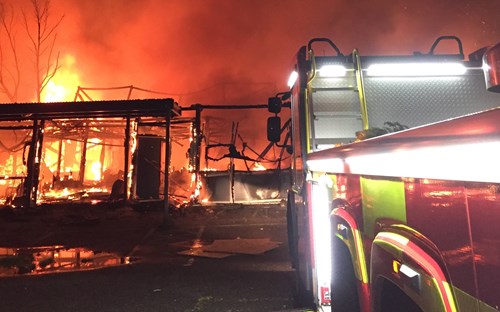 Fire fighters have been tackling a blaze at the site of the former Camberwell Park School in Higher Blackley.

The fire broke out  just after 1am and crews fought the fire for around three hours.

GMFRS will remain at the scene into the morning, ensuring the fire is wholly damped down and the scene is made safe.

Group Manager Phil Nelson from GMFRS said: “It has been a tough few hours but the fire is now essentially out. Our firefighters have worked tirelessly to extinguish the flames and we will be here through the day ensuring that the scene is fully damped down and there are no further hotspots.

“It is too early at this stage to speculate about a cause. I want to thank colleagues from Greater Manchester Police, North West Ambulance Service, the Environment Agency, utilities companies and the local council for their assistance.”

There is still smoke in the local area, including some low lying, so residents are encouraged to take care if travelling and to keep the windows and doors of houses and cars closed.

Two in hospital with serious injuries after M60 smash