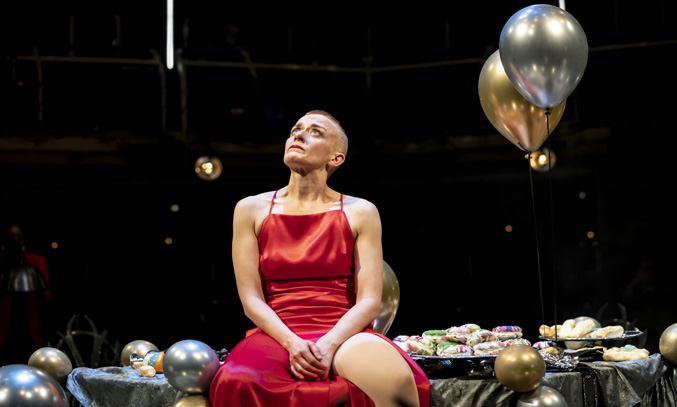 I have seen several versions of “The Scottish play” over the years’ as it was my O-level text back in the day, so I am actually very fond of it and a massive fan of Shakespeare in general. Referring to O-levels may, indeed, give my age away plus it might also explain why I prefer the more traditional approach to Shakespeare.

Recently, I have come to terms with the trend of male roles being played by female actors but, for me, changing the gender of the key protagonists of the play definitely falls into the “changing things for changing’s sake” box. I believe that there are more than enough male and female Shakespeare roles to go around and am really beginning to wonder if I missed the memo informing me that the main aim of going to see a play at the theatre these days is to challenge me rather than just letting me enjoy it, either with or without a modern twist.

The opening scenes were very exciting, made more atmospheric by lots of dry ice and noise, as contemporary soldiers fought their battle on the stage, some turning out to be the three witches up to their wicked mischief.

Enter Macbeth, a woman soldier played by the most excellent Lucy Ellinson, and the confusion starts. I then spent the next 5 minutes wondering if Lady Macbeth was going to be a woman or a man as this would fundamentally alter some of the subtleties of the play. Unfortunately, this meant that I wasn’t in the moment of the play and this certainly wasn’t the last time this happened either.

Lady Macbeth was admirably played by Ony Uhiara and she brought real depth to the part. Macbeth and Lady Macbeth interacted very well and there was definite chemistry between them but it was odd to see Macbeth the soldier turn from the very strong lithe believable character to an elegant but unhinged woman in a slinky red party dress.

Other modernisation changes from male to female parts were Duncan and the Porter and sadly I think the play lost part of its magic as a result, especially as some of the pronouns were jumbled and it left me wondering if these were intended or mistakes.

The banquet scene was performed as a very clever game of musical chairs to rave music with the characters in fancy dress. By his time, I had obviously become acclimatised to the style as this seemed perfectly reasonable and was actually good fun. There is some very inventive stage management of Banquo’s ghost so watch carefully and try not to be distracted by the various slights of hand.

The three witches were funky and modern throughout the play but it was sometimes a little difficult to hear what they were saying which is unusual for The Royal Exchange as the acoustics tend to be spot on.

For me, the heroes of this production are Macduff, Paul Hickey, and Lady Macduff, Rachel Denning as they played their parts beautifully and I was nearly moved to tears at some points. The final scenes where Macbeth gets her – see, I really am with the programme! – comeuppance were well executed but I think the theatre in the round could have been used more effectively for the Birnam Wood to Dunsinane scene and, there goes my traditional expectations again.

This production of Macbeth is the strangest but most modern production I have seen yet but I would still recommend going to see it before it finishes on 19th October. Just bring your open mind with you but if you have never seen any Shakespeare before, I would highly recommend reading a brief synopsis before you go as I overheard several people at the interval wondering what was going on as they found it a little difficult to follow and were actually questioning if this was a tragedy or a comedy.