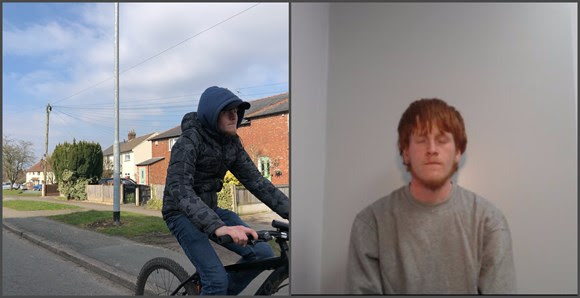 Joshua Etchells aged 20 of Lowton Road, Sale has been jailed for 14 months after pleading guilty to 20 counts of sexual assault by touching. Following his release he will also be required to sign the sex offenders register for 10 years.

The charges against Etchells relate to a series of sexual assaults that occurred between 1 March 2021 and 7 March 2021 on canal tow paths along the Bridgewater Canal, the River Mersey and along the Trans Pennine Trail.

Etchells assaulted 19 women and a teenage girl across the seven day period, including nine women on one day alone.

His offending followed a similar pattern for all of his victims in that they were all either walking or running, often alone, down the tow path when Etchells would approach them from behind on a bicycle.

As he approached and began to pass the women, he would then either grab or slap their bottom and quickly flee the scene on his bike. On two occasions, Etchells approached the victim head on and cycled past them before turning around and cycling back towards them from behind. As he passed, he sexually assaulted them.

Following an assault on the Trans Pennine Trail, one of Etchell’s victims along with a family member decided to drive around the local area to locate him. As they drove around they spotted a male she was confident was Etchells and she shouted out the window at him.

Ignoring her shouts, she managed to take photographs of him, which she then passed over to police.

A full investigation was launched by GMP and on Saturday 13 March, plain clothed officers were on patrol in an unmarked vehicle in Sale and noticed Etchells on his bike and identified him as the male wanted for multiple sexual assaults.

He was subsequently arrested and his bike – that matched the description of the bicycle reported to police – was seized.

Detective Inspector Helen Bagnall of GMP’s Trafford district said: “Firstly I want to extend my thanks and gratitude to all the women who came forward to report the assault. Reporting such incidents is never easy but thanks to their support during the investigation and initial detailed descriptions of Etchells we have been able to secure a conviction today.

“Etchells’ twisted behaviour was nothing short of deplorable and he felt he was untouchable and would be able to flee each assault with little consequence. I’m glad we’ve now been able to place him behind bars where he will have plenty of time to reflect on his actions.

“I hope today also serves as a reminder that GMP will do all in its power to ensure those responsible for such disgusting behaviour are identified and face the appropriate justice. No woman should be made to feel unsafe when she walks the street and I’m glad that today we have been able to remove another dangerous individual from our community.”

Brother of Arena bomber pleads not guilty to murder