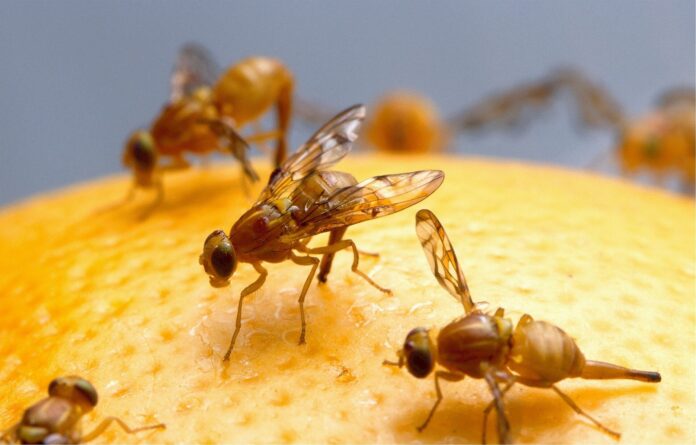 Individuals are likely to prioritise food over sex after being deprived of both, according to researchers at the University of Birmingham, who studied this behavioural conflict in fruit flies.

A new study, published in Current Biology, pinpointed the precise neuronal impulses triggered in flies’ brains when faced with the critical choices of feeding or mating.

Fruit flies, or Drosophila, are commonly used in neuroscience research that can be used to give insights into how more complex brains behave. This is because Drosophila exhibit complex behaviours such as memory and learning, but these are controlled by a comparatively simpler brain, with just around 100,000 neurons. The human brain, in comparison, has around 86 billion neurons.

Dr Carolina Rezaval, the research team leader at the University of Birmingham explains: “We are often exposed to conflicting situations where we must prioritise one goal over others. For an animal in nature this could mean having to choose between feeding, mating or fighting for resources. How does the animal know what to do? The fruit fly Drosophila is a great experimental system to understand how crucial behavioural decisions are made in the brain. We can identify neural elements that direct behaviours with great resolution and decipher the underlying mechanisms.”

Sherry Cheriyamkunnel, Dr Rezaval’s former Masters student and one of the main contributors to the study added: “The knowledge researchers gain in the lab may reveal fundamental mechanisms underlying decision-making that might be common to many species, but are difficult to study in mammalian experimental systems.”

In the study, male flies were kept away from both food and females, and then offered a choice of both. The team discovered that mating was consistently overridden by hunger in flies that were starved, with the behavioural tipping point occurring after about 15 hours of starvation. Once fed, the researchers found the male flies turned their attention to courtship – sometimes within just a few seconds.

The team then used genetic tools to label neurons in the brain with fluorescent markers. They further switched on or off small number of neurons and tested the effects on behaviour. With these tools, they asked how the fly brain responds when there are conflicting options available, and how it chooses amongst them.

In collaboration with the laboratory of Professor Scott Waddell at the University of Oxford, the researchers used a technique called two-photon calcium imaging to monitor the neurons in the brain of live flies. This enabled them to pinpoint activated neurons in the flies’ brains as they made decisions about what to prioritise.

“The neurons that tell the fly to go and eat, or to go and mate, are essentially competing with each other,” explains Dr Rezaval. “If the need to eat is most urgent, the feeding neurons will take over, if the threat of starvation is less, then the urge to reproduce will win.”

The researchers also found that the behavioural choice was not absolutely fixed, and is affected by context. For example, although feeding was prioritised when the fly was low on energy, this decision could also be affected by the quality of the food, with flies rejecting bad food and choosing to mate, even when hungry.

Saloni Rose, a PhD student and one of the main contributors to the study added: “We have so much more still to learn from the fruit fly, for example what happens when other threats are introduced – how would the fly decide whether to feed or escape from a predator, or what would happen if a female fruit fly were confronted with similar choices? All these insights help us to build up a picture of complex decision-making in the brain.”

By learning about general brain mechanisms, researchers will eventually be better able to understand how more complex brains work and what happens when they go wrong in conditions such as addiction, Parkinson’s or Alzheimer’s Disease which are known to affect decision-making processes in the brain.

Airborne telescope gives insight into the birth of stars