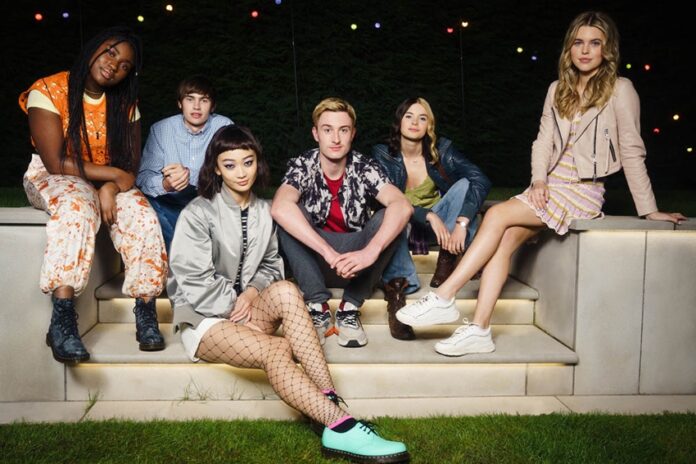 The coming-of-age drama produced by Noho Film & Television, in association with the BFI and ITV Studios, has commenced filming in Welwyn Garden City, hometown of show creator Mark O’Sullivan.

Tell Me Everything introduces us to 16-year-old Jonny Murphy (Davies), who is trying his best to navigate through this world. Growing up hasn’t been easy, and although loved by his friends and family, Jonny suffers from undiagnosed depression and anxiety which he does his best to hide. So when he is faced with the most gut-wrenching tragedy, Jonny has to decide – is he going to let events overtake him or is he going to learn how to live?

His oldest friends, Louis (Fearn) and Neve (Ajufo), are battling their own issues and emotional struggles, yet continue to be there for Jonny. So they are right to be suspicious of Mei (Liang) when she comes into his life. She seems to understand Jonny, but increasingly appears to be a dangerous influence on him. Meanwhile, new college mates, Regan (Lucille) and Zia (Woodcock), initially appear cool and care-free, but as Jonny, Neve and Louis get to know them, it soon becomes clear that everyone is fighting their own personal battles.

Brimming with heart, laughs, pathos and gut-punches, tenderness and darkness, Tell Me Everything explores the stresses of mental health for today’s teens created by the omnipresence of technology and social media, whilst they are still searching for their own identity, exploring sexuality, and experimenting with relationships, drink, drugs and sex (as well as what to wear tonight).

Rooted in truthful observations about life as it actually is for young people, Tell Me Everything is a celebration of adolescence, without shying away from the difficult subjects facing teens as they grow up in the 2020s.  The drama has been co-funded by the UK Government funded Young Audiences Content Fund (YACF) and will be produced in association with ITV Studios. The YACF is managed by the BFI and supports the creation of distinctive content for audiences up to the age of 18. The fund backs the development and production of programmes for free-to-access, regulated television and online platforms such as ITV Hub and ITV2.

Noho Film & Television will produce Tell Me Everything for ITV2 with Joint Managing Directors Robert Wulff-Cochrane and Camilla Campbell executive producing and overseeing production. Prior to founding Noho Film & Television, Robert and Camilla previously headed up the drama department at Channel 4 where they commissioned previous hit teen drama shows Skins and Misfits, among others.

“We are absolutely thrilled with this brilliant cast of rising stars – a group of young actors who show more talent and flair, gravitas and humour, than we dared wish for.”

What’s the most fun you can have in Manchester with friends?