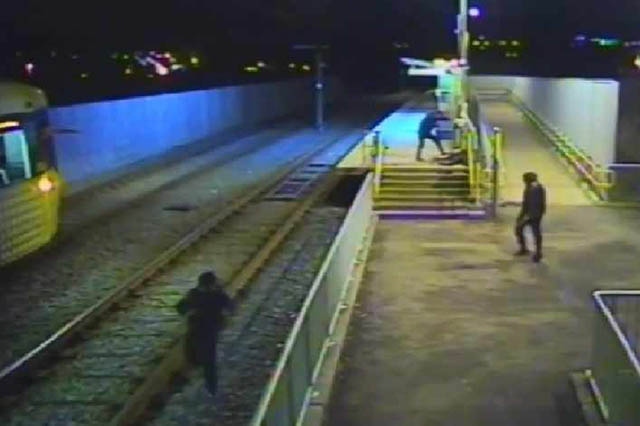 Three Oldham teenagers who repeatedly kicked a man as he lay in a pool of blood at a tram stop have been jailed.

The court heard During the attack, a tram passed through the Freehold Metrolink stop on the opposite side of the tracks and having seen the attack, the tram driver climbed out of his cab and challenged the trio.

The teenagers continued to kick the man – who was unconscious – before passengers on the tram forced the doors open and ran to the victim’s aid.

Shortly after the incident, GMP released the graphic CCTV footage of the sustained attack in the hope the public would come forward to name the perpetrators.

Details from witnesses along with further information received from the public helped detectives to identify the teens.

The victim has thankfully recovered from his injuries but suffered multiple injuries at the time including a bleed behind an eye, a broken nose and extensive bruising. He spent days in hospital.

“They subjected an innocent man to a relentless, brutal and shocking attack for no reason other than because they felt like it.

“They gained enjoyment from beating a man to the point where he was unconscious and was unable to defend himself. They returned on three occasions to inflict agonising injuries and then, only as a result of the passing tram passengers and driver, they stopped and ran away.

“Thankfully we were able to identify these individuals and they admitted their role in this callous attack. They can now spend their time in prison thinking about the consequences of what they did.

“No one should ever feel scared to use public transport and I want to stress that the network across Oldham and Greater Manchester is patrolled by a dedicated TravelSafe team, and local officers will continue to work with TfGM to tackle anti-social behaviour.”

Transport for Greater Manchester’s Head of Metrolink, Danny Vaughan, said: “This was a disgusting and mindless attack and we are extremely thankful that the victim was able to recover from his injuries.

“I have no doubt that the consequences could have been far worse – possibly even fatal – had the tram driver and other passengers not confronted these thugs when they did.

“CCTV played a vital part in securing these convictions and this case should act as a strong warning and deterrent to others. We have a sprawling network of CCTV on all our trams and stops and will not hesitate to handover the footage to police and partner agencies to help bring offenders to justice on the rare occasions something serious occurs on the network.”

Aline Frantzen, Managing Director at tram operator KeolisAmey Metrolink (KAM), added: “Our thoughts are with the victim of this dreadful attack, and we echo the sentiment that we are extremely thankful the victim has made a recovery from his injuries.

“I would like to take this opportunity to praise the actions of our driver. Customers are at the heart of everything we do, and our driver’s brave attempts to intervene in this vicious attack undoubtedly prevented an even more serious outcome.”

Two jailed after mowing down a motorcyclist in Burnage