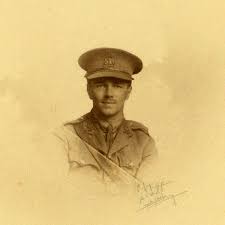 War poet Wilfred Owen who fought in the First World War as part of the Manchester Regiment is being commemorated this weekend in both Manchester and France,one hundred years since his death on November 4th 1918.

His death aged 25 came just a week before armistice was declared, with his mother receiving the telegram informing her that her son had died, just as the church bells declaring the armistice rang out.

Owen died on the edge of the small village of Ors in northern France on November 4 1918 with forty members of the Manchester Regiment, during an ill-fated operation to build a floating bridge across the Sambre-Oise canal that runs through the village.

The Manchester Regiment were charged with pushing back the German troops,who had dug themselves in on the far side of the canal and destroyed the bridges and locks, towards the Belgian border.

Owen and his fellow soldiers set off before dawn from the house in the middle of woodland they had been sheltering in, to begin their task.  They had barely started however before coming under gun-fire, and in total forty soldiers – including Owen – were to lose their lives.

A hundred years later, a group of school pupils from Greater Manchester will gather in Ors to see for themselves the house from which Wilfred Owen and his fellow soldiers set off on their last mission, the canal-side location of their final battle, and the cemetery in Ors in which they are buried.  They will also take part in a special memorial service in the local church to commemorate Owen’s death and that of his fellow soldiers.

The house that provided shelter to Owen and his troops, the Maison Forestiere, has been reconstructed in honour of those who fell and is now a centre of commemoration, with the cellar in which the troops stayed left exactly as it was described by Owen in a letter he wrote to his mother from there.

Here in Manchester, an event to remember and find out more about Wilfred Owen is taking place in Central Library from 2 – 4:30 pm today,Saturday 3 November.

The event, in partnership with the Duke of Lancaster’s Regiment, Manchester Cathedral, and Manchester Histories, will include a talk about Owen’s life and his time with the Manchester Regiment, and the Regiment’s battle at Manchester Hill.

As well as commemorating soldier and poet Wilfred Owen, the event will,perhaps fittingly,see the launch of the Manchester Hill poetry anthology, written earlier this year by local schoolchildren in response to the centenary of the Battle of Manchester Hill. There will also be a chance to handle library archive artefacts from the First World War.

Filming for CBBC award winning So awkward begins in Manchester