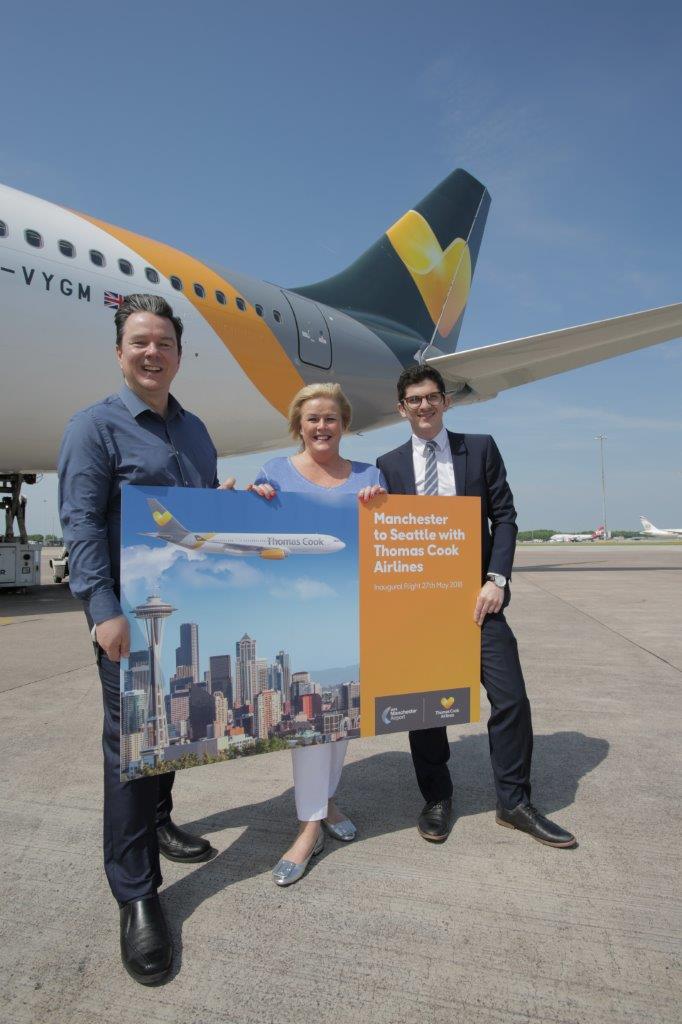 The twice weekly direct flight from Manchester will operate throughout summer until September 20 2018. It is Thomas Cook Airlines’ latest direct long-haul route from the airport, taking the airline’s number of seats on sale from Manchester to over three million.

Thomas Cook Airlines has a fleet of 19 aircraft based at the airport, including its A330 long-haul fleet, it is Manchester airport’s largest long-haul airline.

During summer 18 and winter 18/19, Thomas Cook Airlines will fly to 70 destinations from
Manchester, 17 of which are direct long-haul routes with Seattle taking its US total to seven, the largest number of stateside routes of any airline from the airport.

The 250 lucky customers on Sunday’s inaugural flight were swept up in the Seattle spirit at check-in with an invitation to a gate celebration. At the gate, a jazz band created a party atmosphere and pilots and cabin crew joined in the celebrations. A special cake was cut for all to enjoy and with Seattle the famous birthplace of Starbucks, customers enjoyed free Starbucks coffee with their cake.

“Manchester is our long-haul hub in the UK and we are looking forward to a successful new route in Seattle. It’s fantastic that we are able to mark the occasion with a lively airport event for customers. “As well as a fantastic destination in its own right, we have seen 43 per cent of bookings for Seattle have a feeder destination at either end with one of our partner airlines, with the most popular including Portland, Salt Lake City and Honolulu. Our number of feeder destinations has grown by 30 per cent over the last two years. This highlights that our growing number of interline agreements enable our customers to explore the world when flying with us from Manchester airport.”

“Everyone at Manchester Airport is delighted to see direct flights to Seattle commence from the UK’s global gateway in the North. “In the UK this route, alongside a host of our other long-haul destinations, can only be found at Manchester Airport outside of London. It cements our position as the UK’s Northern hub and will unlock a host of economic, trade and tourism opportunities for the North.

Thomas Cook Airlines – Manchester to Seattle is a nine and a half hour direct flight on a Sunday and
Thursday during summer 2018. Prices start from £399.99 one-way. To book visit
www.thomascookairlines.com, call 0844 412 5970, or visit your nearest Thomas Cook store.