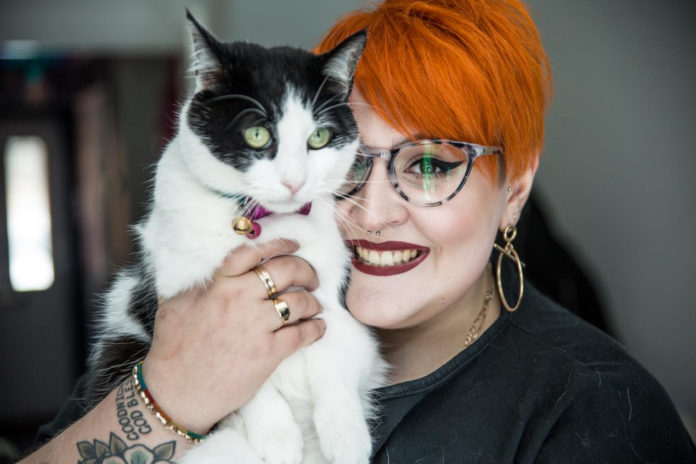 Cats Protection is asking cat owners in the north west to nominate their furry friends in this year’s National Cat Awards.

For over a decade, the Awards have celebrated the difference cats make to owners’ lives by highlighting heart-warming stories of devotion, companionship and courage.

Could your cat follow in the paw prints of successful entrants Arthur, from Sandbach, Awol, from Barnsley and Lucky, from Greater Manchester?

Arthur was the winner of Cats Protection’s Most Caring Cat Award 2018. Suffering with serious mental health issues, Emily Hatton spent much of the past eight years receiving care at specialist hospitals. Having Arthur has helped Emily adjust to everyday life and live independently for the longest period in her adult life.

Awol was shortlisted for Cats Protection’s Most Caring Cat Award 2018. The tragic loss of Nicola Hamblett’s grandmother was the beginning of a terrible few months for her, during which she lost five other relatives and friends. Sinking into depression and developing alopecia, Nicola’s lifeline came with the arrival of Awol, who turned up on her doorstep and refused to leave.

Lucky was shortlisted for Cats Protection’s Furr-ever Friends Award 2018. Ten-year-old Graham Hudson had severe learning difficulties, making it difficult for him to communicate his feelings and form friendships. Fortunately, he had a best friend in the form of Lucky, the family’s four-year-old cat.

Cats do not need to have been adopted from Cats Protection to be nominated for an award and owners have from 15 January until noon on Friday 8 March to enter one of five categories:

The National Cat Awards is sponsored by PURINA® and a panel of celebrity cat-lovers will select the winners. The winning cats’ owners will then be presented with their trophies at a star-studded ceremony at London’s Savoy Hotel on Thursday 8 August – coinciding with International Cat Day.

Cats Protection’s Awards organiser Kate Bunting said: “This event is the highlight of the feline calendar and gives us the chance to celebrate everything we love about cats.

“Every year, the entries we receive go to show why cats make such great pets – whether it’s for helping their owners through times of sadness or loss, heroic moggies who come to the rescue or brave felines who survive against the odds.”

The overall winner will inherit the title of National Cat of the Year from Theo, who helped his owner Charlotte Dixon survive a potentially fatal blood clot.

Broadcaster and writer Andrew Collins, whose own cat Gerry was previously a stray, will be one of a panel of celebrity judges selecting the National Cat of the Year.

He said: “Cats make a house a home and whatever stage of life they join you, it improves everything. The National Cat Awards honour acts of extraordinary bravery, empathy and loyalty. Humans are lucky to be chosen and adopted by cats of all ages.”

For further information about the awards email nationalcatawards@cats.org.uk or phone 03000 12 12 12. Anyone wishing to nominate their cat should visit www.cats.org.uk/national-cat-awards

So, you think you’re good at remembering faces, but terrible with names? Study suggests...

Top Things About Going to University in Manchester