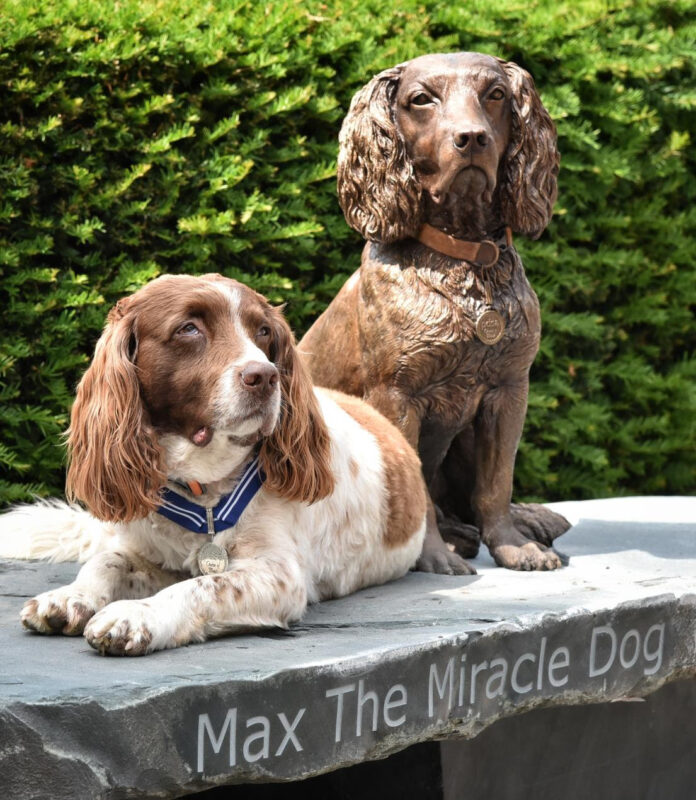 Max the Miracle Dog, who made headlines around the world when he was awarded the PDSA Order of Merit* earlier this year, has today (Friday 2 July) had a permanent statue unveiled in his hometown of Keswick, Cumbria.

The famous four-legged hero has been honoured with a bronze statue in his likeness, which is perched on a bench in Hope Park so that all his fans for years to come can sit and have a cuddle with the loyal pooch.

English Springer Spaniel Max became an online star thanks to his owner Kerry Irving’s regular updates on social media. Photos and videos of their antics in the Lakes, charity walks and public appearances had already made the special spaniel a household name, but when the pandemic hit in 2020 Max’s daily live broadcasts resulted in him becoming the world’s virtual therapy dog, with dedicated fans tuning in from Australia to America.

Their daily Facebook Live videos became a lifeline for hundreds of thousands when the world went into lockdown, helping people through incredibly dark times of isolation, grief, loneliness, anxiety and fear. In February 2021, Max was presented with the PDSA Order of Merit, also known as the animals OBE, for his outstanding contribution to society.

Now his statue, which has been designed and made by local sculptor Kirsty Armstrong, is a permanent tribute to Keswick’s most famous dog. Reacting to the unveiling, Max’s owner Kerry Irving said: “Hope Park is the perfect location as Max has brought hope to so many people. It’s incredible that our little boy, proudly wearing his PDSA Order of Merit, will now be sat there and remembered for generations to come.”

David Hall, Keswick Town Crier, introduced the ceremony, and the statue was unveiled by 12-year-old Sophie, a local girl who has dyslexia and who has found great comfort in Max’s stories. Mayor of Keswick, Cllr Alan Dunn, also joined by his wife and Mayoress, Heather, as part of the unveiling ceremony said: “Max is an extraordinary dog, he’s Keswick’s Canine Ambassador, and I’m delighted to be able to help unveil this wonderful tribute to him today. Max’s gentle nature has touched so many people around the world, and his and Kerry’s dedication to charitable work and helping as many people as possible is a true testament to the unshakeable bond between one man and his dog.”

The statue was paid for by a crowdfunding campaign, which raised £26,000 in a single day – so much that Kerry was able to donate additional funds to vet charity PDSA, which provides free and low cost veterinary care to the pets of people in need. Kerry added: “Everyone has been so incredibly supportive, I can’t begin to express my thanks to all those who donated their hard-earned money, the Town Council and Hope Park Trust for arranging this wonderful location, our local sculptor Kirsty, and Honister Slate Mine, who helped us pick the perfect slate for the bench. And the fact we were able to donate additional proceeds to PDSA too is wonderful, as it’s a charity that is very close to my heart. I’m humbled by it all, and hope that Max’s statue will bring great comfort to all those who visit.”

Amy Dickin, Awards and Heritage Manager at PDSA, said: “Max has become a symbol of hope and happiness to thousands of people and we were thrilled to honour him with the PDSA Order of Merit, in recognition of his service to society as a virtual therapy dog. This beautiful statue is a fitting tribute to Max and will give his fans the chance to ‘meet’ him whenever they visit Hope Park. Kerry has worked so hard to make this happen too – he will no doubt be very proud of his boys today.”

Springer Spaniel Max, now 13, was adopted by his owner, Kerry Irving, back in 2008. Having been seriously injured in a traffic collision two years earlier, Kerry was suffering from chronic pain, unable to walk and was diagnosed with severe depression. A chance encounter brought Max into his life, and nothing has been the same since. Kerry credits Max with saving his life, and photos of Max out on his walks quickly made him a popular social media star. Max went on to make public appearances, charity walks and school visits, meeting and helping more than 10,000 people and raising around £300,000 for charities, including PDSA. He was even invited to Kensington Palace and met the Duke and Duchess of Cambridge.

When the pandemic hit in early 2020, Kerry and Max broadcast their daily walks online (along with Max’s ‘brothers’ Paddy and Harry) from their local beauty spots in the Lakes. Via Facebook Live videos, hundreds of thousands of people all over the globe were able to join them, providing vital comfort, support and escape while the world was in lockdown. Max became the world’s virtual therapy dog, his continuous presence helping people when they needed it the most, through incredibly dark times of isolation, loneliness, anxiety and fear.

Max was the first ever pet to receive a PDSA Order of Merit since its inception in 2014; all 32 dogs and horses that have received the medal previously have been specifically trained to perform roles in society, including Police Dogs and Horses, Medical Detection Dogs and Search and Rescue Dogs.

People can follow Kerry and Max, plus Max’s brothers Paddy and Harry, from his Facebook page Max out in the Lake District. To find out more about his PDSA Order of Merit visit www.pdsa.org.uk/Max.

Who Does Laser Marking In The UK?