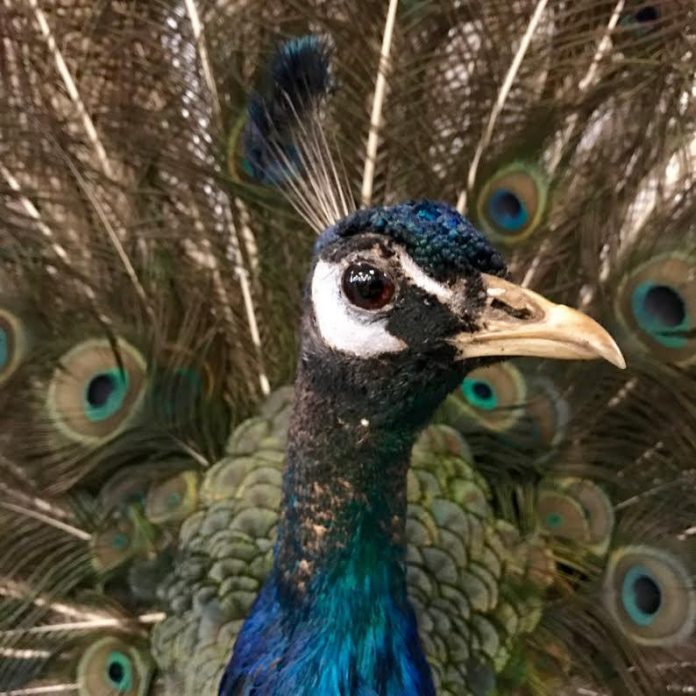 Specimens of two of the world’s most iconic bird species – the Indian Peacock and the Red-crowned Crane – are being exhibited at the library, as part of a collaboration aimed at connecting more Manchester residents with the fascinating collections held at Manchester Museum, part of The University of Manchester.

The Peacock on show dates back to the late 19th century.  This species is the national bird of India and is renowned as one of the most spectacular wildlife sights anywhere in the world, due to the beauty of its dazzling tail feathers.

The stunning Red-crowned Crane is shown in a typical courtship display pose, with its head thrown back and beak skyward.  These impressive, five-foot tall birds are hugely important culturally in China and Japan, but are endangered, with only around 2,500 existing in the wild.

As part of the collaboration, Museum and Libraries staff and local artist Harriet Hall will work with the Longsight Library Storytime group for young children to create a new story based around the Crane and the Peacock, which will be unique to Longsight Library.

Dr Nick Merriman, Director of  Manchester Museum said: “Having previously held exhibitions in Gorton Library, North City Library and Forum Library Wythenshawe, we were very pleased when the council approached us to work together again to help embed culture in the city’s neighbourhoods through libraries.

“By working with local libraries, we hope to engage a wider range of residents and communities with the museum’s collections and the activities we offer.  This is a great opportunity for us to connect with local families and schools.”

The exhibits will be at Longsight Library until the end of 2017.

Come and see the Peacock and the Crane from Manchester Museum at a special afternoon of free family activities this Saturday (15 July, 2:30 – 4:30pm), including a South Asian performer and the chance to make origami cranes. Refreshments included.

Marc Almond at the Bridgewater Hall