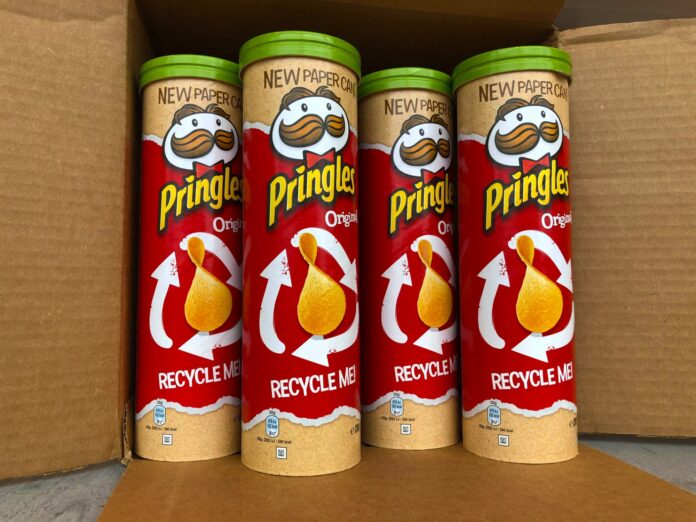 The iconic Pringles can is set for a major eco makeover as the company announces the trial of a new tube made of recycled paper which is widely recyclable.

Launched in partnership with Tesco, the trial will take place in a small number of the grocer’s stores across East Anglia from September 9th.

Invented by organic chemist and food storage technician, Fredric John Baur, the famous Pringles can has been a defining feature of the product since it was launched in 1967 in the USA.

The current tube is made up of a combination of foil, paper board, metal and plastic meaning it can be difficult to recycle through the existing household recycling system set-up. But the make-up of the new-look can means people will be able to pop this in their home recycling bins.

The paper cans will be trialled with two different lids, a paper lid and a plastic lid. Both can also be recycled.

It’s taken a team at Kellogg, the company which owns Pringles, almost 12 months to create the new tube. It has been specially designed to protect its iconic hyperbolic paraboloid shaped crisp, maintain long shelf life while ensuring the crisps remain crunchy and be widely recyclable.

If successful, the company could roll out the new look packaging across Europe. The new paper Pringles tube test in the UK follows a similar trial of a recyclable steel can in Italy at the end of last year.

The development of new solutions for the Pringles can is part of Kellogg’s commitment to ensure 100 per cent of its packaging will be reusable, recyclable or compostable by end of 2025.

Aside from packaging, Pringles has already reduced its impact on the environment in many ways. Over the last decade, changes to production have meant Pringles uses 18% less water, 16% less carbon emissions and 16% less waste per gram of packaged product. In the UK, the company partnered with Terracycle two years ago so that Pringles shoppers could join a scheme to return their cans to be recycled into other items.

Speaking about the pilot, Miranda Prins, Pringles vice-president, said: “We are eager to play our part and reduce our impact on the planet. And, Pringles fans expect that of us too. So, we’ve worked hard to come up with this new can which is widely recyclable and keeps our chips fresh and tasty and protects them from breaking up – which helps to reduce food waste.

“The important thing for us now is getting the trial up and running with Tesco and collecting all the data and consumer feedback. At this stage it is too early to say whether we’ll roll out this new paper tube, however, the information we collect will help us understand if people like it and if it works on the supermarket shelf and at home. This trial will help us create the Pringles can of the future.”

The Tesco based trial of the new paper can will last for six weeks. In-depth studies will be conducted to help Pringles understand the reaction of shoppers – including high-tech eye tracking analysis to show how people visually react to the new packaging on shelf.

Sarah Bradbury, Tesco Group quality director, said: “We are working at speed with our suppliers to remove packaging where we can, reduce what we cannot remove, to reuse more and to make sure the packaging we do use is recyclable. This work is achieving real change for our customers and our environment. It’s vital that all products become recyclable as quickly as possible and we’re delighted that Pringles are trialling its new tube exclusively with us; and we look forward to further progress.”