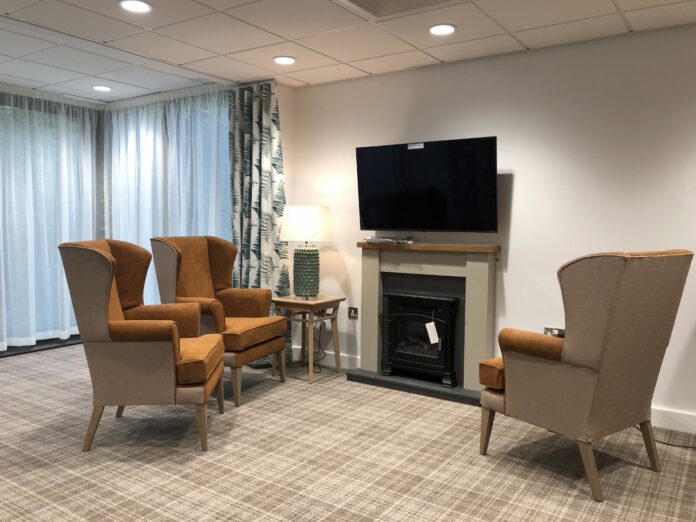 Residents of Broughton House Veteran Care Village in Salford will move into their new accommodation next weekfollowing the completion of the first stage of a £15m redevelopment.

Military veterans will move into a three-storey building which has been named The Stoller Wing in honour of north west businessman and philanthropist Sir Norman Stoller, whose charitable trust has provided substantial financial backing for the scheme.

The building features residential care and nursing care accommodation, with a total of 32 beds over two floors. Each floor of accommodation has an activity room, a lounge, a kitchen and a balcony.

On the ground floor is a café for residents and their families, staff and the general public, along with the Broughton House museum, a reception area, hair salon, physiotherapy and treatment room, conference facilities and, for the time being,the Armed Forces Support Hub.

The hub will be relocated after the next stage of works, and the space it currently occupies will become a gymnasium.

Work on the next stage of the scheme is due to begin in October. This will see the construction of The Jellicoe Wing, which will feature a total of 32 residential care and residential dementia care beds and six independent living apartments alongside the Armed Forces Support Hub.

The redevelopment of the two-acre site is being carried out in phases to minimise the disruption to the veterans living at Broughton House.

It will create the UK’s first Veteran Care Village at the only home in the north west for ex-servicemen and women. Outdoor features of the redevelopment will include memorial gardens, a bandstand, landscaped gardens and a bowling green.

So far, Broughton House has raised £11.5m towards the total cost of the scheme.

Significant funds in addition to those given by the Stoller Charitable Trust have come from the Greater Manchester Combined Authority, the Garfield Weston Foundation, The Band Trust, Lord Glendonbrook and from LIBOR funding, a government initiative created to redistribute the proceeds of banking fines.

Eric Wright Group is the main contractor for the project, which is being managed by Dooley Associates. Levitt Bernstein is the architect.

Tom O’Brien, chairman of the Broughton House Executive Committee, said: “We are thrilled that the commissioning of The Stoller Wing at the Veteran Care Village will be taking place this month. It will be an iconic building where our veterans and families will receive the care and service they richly deserve.

“We could not have achieved this important milestone without support from a variety of sources, and we are extremely grateful for the commitment of all those organisations and individuals who have contributed and for the belief they have shown in the concept to help bring our vision to reality.”