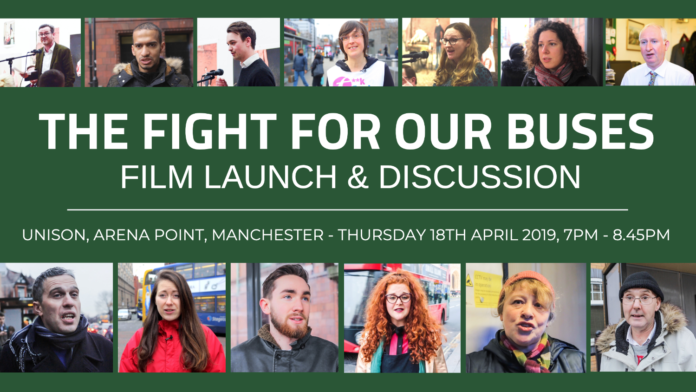 There is a growing movement calling on Andy Burnham to regulate Greater Manchester’s buses and the group made this film because they believe that his decision could trigger a change in how buses are run all over the UK. The decision is expected later this year – and with over eight millions of miles of routes cut since 2014, the campaign believe that the pressure has never been higher to bring Greater Manchester’s buses back under public control.

The documentary is co-directed by Emily Yates and Summer Dean from the Association of British Commuters.

The film will be followed by a panel discussion and Q & A hosted by Pascale Robinson from
Better Buses for Greater Manchester. The panel includes; Emily Yates, co-founder of the
Association of British Commuters; Luke Raikes, Senior Researcher at IPPR North; Mike
Hughes, bus passenger and experienced accessibility campaigner; and John Boughton, Unite regional officer.

Free tickets to the event can be booked here and we would be grateful if you could include this link in any coverage: fightforourbusesfilm.eventbrite.com