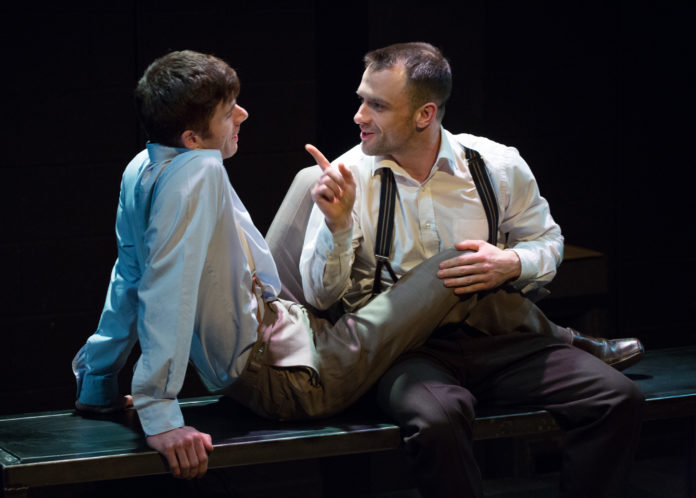 The critically acclaimed and award winning play – All I See Is You – returns to the North West from May 27th- June 1st – making its debut at Hope Mill Theatre following its Premiere and sell out run at The Octagon Studio in Bolton last April. This moving and heartfelt love story is inspired by real accounts of queer life in Bolton and Manchester from fifty years ago. Written by Kathrine Smith, All I See is You was joint winner of the prestigious 2017 Octagon National Prize – written in response to the 50th anniversary of the partial decriminalisation of homosexuality in the UK.

Bobby works on Woolies’ record counter. Ralph dreams of being a teacher. One kiss and they’re hooked. But it’s 1967 and their love is illegal. While Ralph buries his head in his books and tries courting his sister’s pal, Bobby can’t deny who he is and throws himself into the Canal Street underground scene in Manchester risking blackmail and arrest…

All I See Is You is a powerful, moving and tender two-hander telling the tale of two ordinary lads poised between lust, self-doubt and arrest. The title of the play is in homage to iconic singer Dusty Springfield who sang love songs while having to hide her relationships with women. Her music and other 60s pop classics are interspersed throughout the play.

Playing the parts of Bobby and Ralph are Ciarán Griffiths and Christian Edwards. Ciarán is currently starring in ITV’s The Bay. He is also known for his TV roles in Shameless and The Bill. Other TV work includes Coronation Street, The Mill, This Is England ’90, The Street and Clocking Off. Ciarán’s theatre work includes And Did Those Feet (Octagon Theatre), Shirley (Hope Mill Theatre), Paradise Bound (Liverpool Everyman) and New Year’s Day (Royal Court). Christian’s most notable theatre work includes Oliver! (Theatre Royal, Drury Lane), Les Misérables (Queen’s Theatre), Radio Times (Watermill Theatre UK Tour) and Cyrano (Northern Broadsides). He has also appeared regularly at the Octagon Theatre, Regent’s Park Open Air Theatre and the Pitlochry Festival Theatre where he won a Leon Sinden award for his role in She stoops to Conquer.

Director Ben Occhipinti’s many credits include Summer Holiday, East is East, A Christmas Carol, Talking Heads (Octagon Theatre), Mack and Mable (Greenwich Theatre), Bugsy Malone and Calamity Jane (Theatre Royal Bath), and Spend, Spend, Spend (Birmingham Old Rep).Writer Kathrine Smith writes mainly for TV. Her credits include EastEnders, Holby City, Suspects, Casualty, Hollyoaks and The Bill. Her first play Unprovoked was performed at Roundhouse, London. She wrote All I See Is You the same year the Bolton Octagon celebrated its 50th anniversary, which led her to think about life for queer people in Lancashire back then….

In recent Stonewall research one in five LGBT people said they had experienced hate crime in the UK. Around the world there are 73 countries with laws criminalising homosexuality and many more where it’s legal to discriminate*. All I See Is You looks to the historical roots of discrimination, taking inspiration from those who had the courage to fight prejudice and be their true selves.

All I See Is You, written by Kathrine Smith and Directed by Ben Occhipinti runs at Hope Mill Theatre for Queer Street Productions from Monday 27th May to Saturday June 1st as part of its current UK tour.  Please note the play is only suitable for ages 16+. https://hopemilltheatre.co.uk/events/all-i-see-is-you/

3 Minute Scares is back for its Fifth Fantastic Year