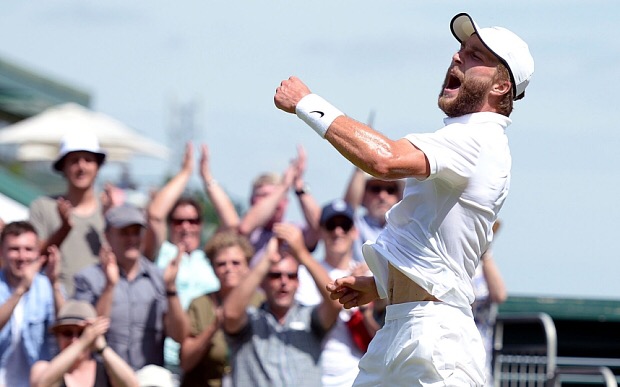 He is probably not as yet following in the footsteps of another of Stockport’s tennis greats but yesterday afternoon British number six Liam Broady Put himself firmly on the map after coming back from two sets down to beat Australia’s Marinko Matosevic 5-7 4-6 6-3 6-2 6-3 on the opening day at Wimbledon.

Liam, ranked 44 places below his opponent at 182nd, enjoyed the best win of his career against the Australian, a career that began at the age of four which saw the twenty one year being crowned 2010 Wimbledon’s Junior Doubles Champion and 2011 Junior Wimbledon Runner up and reaching the final of the 2012 U.S. boy open.

The avid Manchester City fan who attended Priestnell school in Heaton Mersey, reached No. 2 in the junior combined world rankings in March 2012.

Younger Brother to Naomi, his father Simon has never forgiven the Lawn Tennis Association after they withdrew her funding in 2007 for posting a few harmless photos of a night out on social media. When Liam decided to accept the LTA’s help, his father stopped speaking to him and in post match interviews yesterday, it seems the family rift is no closer to being sealed.

Broady plays David Goffin, the No  16 seed from Belgium, in Wednesday’s second round.

His sister had less luck on the grass, losing in straight sets to Mariana Duque-Marino yesterday.