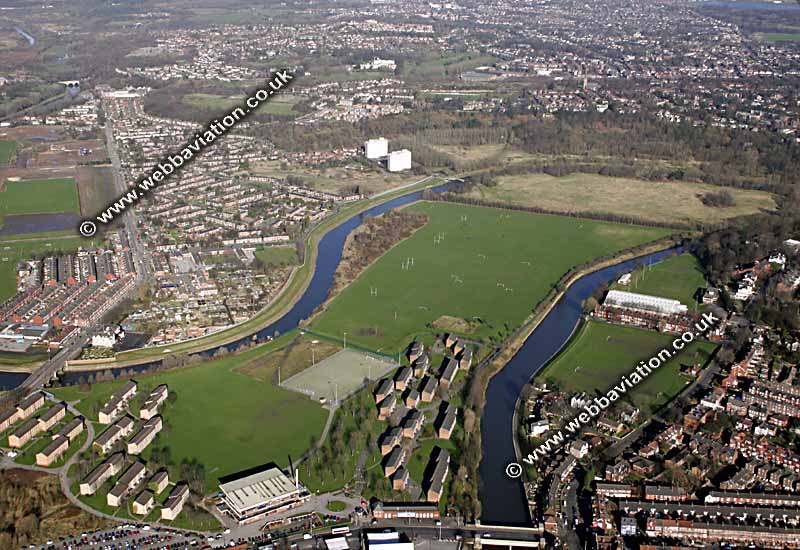 The legendary Castle Irwell closed its gates for the last time at the weekend.

For the last 42 years, the student village has been home to an estimated 40,000 students and has gained iconic status.

Earlier this month, the Alumni Engagement Team, the Students’ Union and the Accommodation Office organised a Farewell event to mark its closure. As well as an opportunity to get together with their fellow ‘Irwellians’ and say goodbye to their former home, attendees enjoyed a range of sport, entertainment and music at this free daytime event.

Over 600 alumni, colleagues and students came along, many with their families. There were also several who had met their partners at the student village.

Gareth Pettit, Alumni Engagement and Regular Giving Manager said: “The response from guests was resoundingly positive and we met lots of happy alumni who thanked the teams for putting on the event, and a number of groups who used the occasion to organise reunions with their old friends. It was a pleasure to see so many former students meeting up again, and graduates from as far afield as Southampton, London and Ireland had made a special trip back to Salford. But the alumnus who had flown in from Dubai had certainly travelled the furthest! “

Visitors were able to enjoy one last barbecue courtesy of Salfood, or choose from a range of other food stalls accompanied by a drink from the Students’ Union ‘pop-up’ bar – the Pav being now closed.

Many attendees took the opportunity to participate in sports, including softball, football and ultimate frisbee – with some alumni forming teams especially for the occasion. There was also a coconut shy, a bungee run and even a bucking bronco to keep everyone entertained. Shock radio were there all afternoon and provided a soundtrack of all the hits from the last 40 years.

By far the most popular activity was the opportunity to take a trip down memory lane and tour the show house on site, complete with a slideshow of photos and memories playing in the dining area.

There was a genuine air of nostalgia and celebration and the guest book comments pay testament to the happy memories created by the recent event and the old place itself:
Here are some of the messages

First to come to ‘the village’ in September ’73 – this was state of the art civilised accommodation! Brilliant memories – long live Castle Irwell!” Steve Jones (1973- 1976)

“Many happy memories of meeting in the Pav and just celebrated our 10th wedding anniversary last week. Loved Tommy Trax and his Wheels of Steel!! Thank you lovely University of Salford!” Katy and Chris Mann (1998 – 2002, house 44)

“Brings back many happy memories of my time at Salford. Still in touch with some fellow students from 40 odd years ago! Castle Irwell was a great place to live. Thank you for your lovely welcome back.” David Bennett (1978)

“Thanks for letting us in to see the houses again! We met in the student village in 1977, got to know each other walking from the village to our Applied Biology course and we’re still together! Happy Memories!” Many thanks Jeannie & Chris Ball (1977 – 81)

“It’s been wonderful being back to see and say farewell to Castle Irwell. I used to live in house 10 and will never forget my time spent there. I wish the very best to all the staff members of the University who helped a great deal in making me who I am now.” Sabih Abbasi (2007-8)
“This house is the site of the great water pistol fight of 2008!” Dave Rothwell (2007 – 2011)

Plans approved to convert Cheadle’s Bruntwood Hall into a hotel