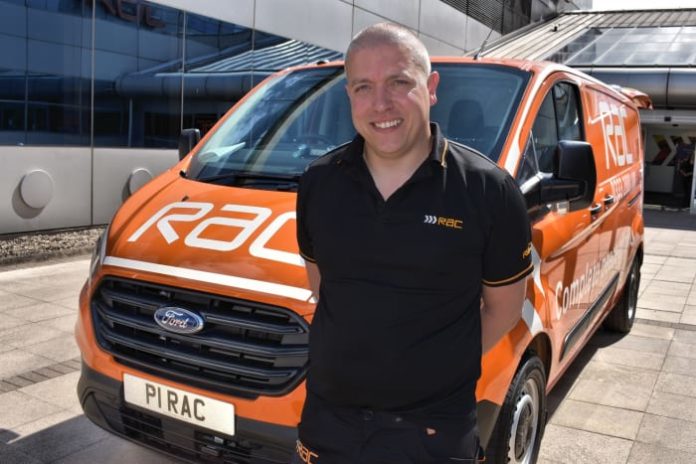 After just two years working as an RAC roadside technician rescuing stricken drivers in the south Manchester area, Ben Aldous has been named RAC Patrol of the Year 2019, making him one of the fastest ever to achieve the accolade.

In December 2016 Ben, 33, relocated from Norwich to Stockport with his fiancée Holly and their two young children to take up his dream job of becoming an RAC breakdown patrol, having applied to the company four times before.

Just over 12 months later he won the RAC Bright Beginnings Award and quickly went on to achieve a vehicle fix rate of 95% – one of the best in the RAC and well ahead of the patrol average of 80% – one of the performance criteria needed to help him win the coveted Patrol of the Year title at the RAC’s 2019 annual colleague awards.

Ben said: “It’s a fantastic honour to be named RAC Patrol of the Year. When my name was called out at the awards ceremony it felt like time stood still. I just couldn’t believe it. It’s one of the biggest achievements of my life.

“Unfortunately, I wasn’t able to celebrate very much as Holly and I had to catch a flight to Paris the next day to take the kids to Disneyland Paris, but that didn’t matter as I was just so happy to have won.

“I applied four times to become an RAC patrol but there was never a job available in the Norwich area so when one came up in Manchester I jumped at the opportunity. Luckily, Holly’s family are in Stockport so we were able to live with them initially. I only had 12 days between handing my notice in to the garage I was working at and starting training at RAC HQ in Walsall. But looking back it was a fantastic decision as I’ve loved it from day one.