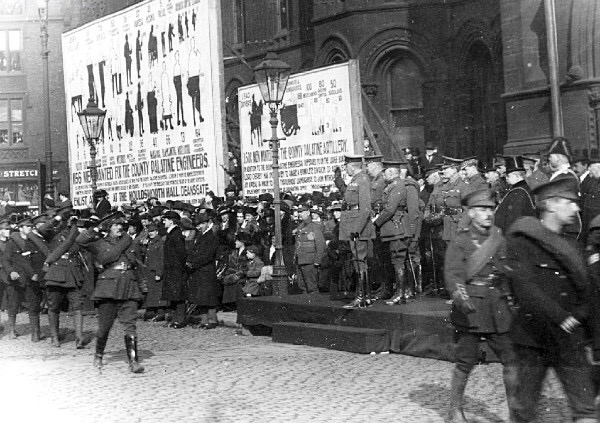 A service to commemorate a local Clayton soldier who served at the Battle of the Somme will take place at Clayton War Memorial on Tuesday 28 June.

The service is set to take place just days before Manchester hosts the national UK commemoration for the Somme Centenary on Friday 1 July.

Ann Hodge (nee Lomas), who lives in Australia, wanted to ensure that in the Somme Centenary year, her grandfather, Corporal William Lucas Cain, who was born on Buckley Street, Clayton, was remembered on the Clayton War Memorial.

With help from historian and former MP Mike Hall and Manchester City Council, Anne got the necessary legal permission from the Council and paid for a stonemason to inscribe her grandfather’s name on the memorial.
She will be visiting the War Memorial in Clayton Park for a service at 11 am on Tuesday 28 June with Mike Hall, Deputy Police and Crime Commissioner, Jim Battle and local councillors.

Anne Hodge commented: “My family has a long standing military tradition and I felt it was really important that my grandfather had his name on the Clayton War Memorial. I appreciate the help that the Council has given and it will be a very poignant moment when I see the inscription. I would like to extend my thanks to the council and the Friends of Clayton Park for marking this occasion.”

Jim Battle, Deputy Police and Crime Commissioner and Patron of Friends of Clayton Park, said: “This is a fitting tribute to a courageous man who sacrificed his life for his country and I’m proud to be part of this service. Corporal Cain was one of thousands of men who fought in the Battle of Somme, many of whom never returned to their families. As we mark the 100th anniversary, we must all stand together in solidarity to commemorate those who made the ultimate sacrifice.”

Corporal Cain enlisted to join the war at Ashton-under-Lyne in 1915 and died from gunshot wounds on the 30 September 2016, aged 34. He is buried in Warlincourt Halte British Cemetery Saulty, Pas de Calais.

Big increases in in-work relative poverty rate are about much more than just low...