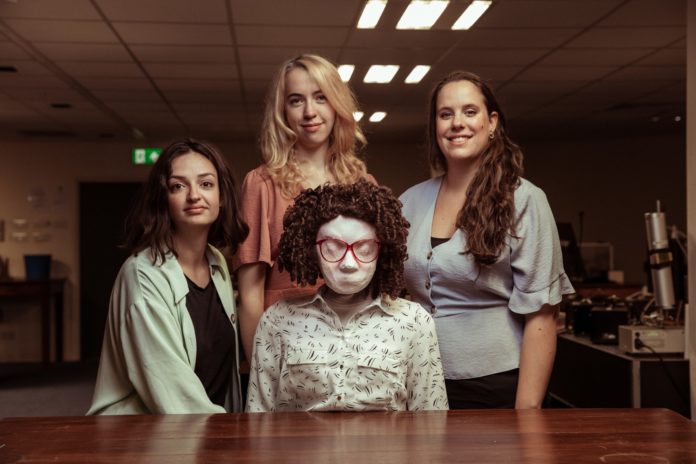 Inspired by interviews with female scientists and the real-life story of Lise Meitner (a physicist who discovered nuclear fission in the late 1930s but whose colleague Otto Hahn was awarded the Nobel Prize for the discovery), Flux charts the story of Kate, a young physicist burning with potential.

She struggles to be noticed until a male colleague uncovers her brilliance and pushes her forward. But, just as Kate begins to excel professionally, the balance between life and work suddenly flips. Smoking Apples use extraordinary life-size puppetry, an electrifying set of shadow and light and a filmic score to tell Kate’s story as she navigates what it means to be a woman in a male dominated environment.

Since 2018 was the anniversary of women’s suffrage, Smoking Apples challenged themselves to create a piece about a woman, exploring how puppetry can express the objectification of the female form, and work for the first time with an entirely female cast.

With a dynamic, tetris-like set based on the periodic table, a blend of live action and shadow puppetry and a thumping 80’s soundtrack by award-winning composer Jon Ouin, Flux explores the ever-resonant story of a woman fighting to be heard.

Smoking Apples is a puppetry and visual theatre company that works with difficult, hard-to-digest subject matter. They create innovative shows, making their subjects enjoyable and accessible for audiences, combining puppets, live actors and a unique style of movement. Flux is Smoking Apples’ sixth original production. The company’s previous work include In Our Hands which received critical acclaim and has toured the UK and Europe, and CELL, a collaboration with Dogfish theatre company, which was nominated for a Peter Brook Award 2014. CELL has undertaken two national tours, played to sold out crowds at the Edinburgh Fringe Festival 2015 and, in 2017, toured to Malaysia and Hong Kong.

Molly from the company said: “Flux has been in the making for a while and we’re hugely excited to be travelling around the UK with it, touring is when our shows really come to life. Everyone knows someone like Kate, whether that’s you, a sister or partner, so I think that makes her story easy to connect with. Although the show is set in 1980’s, it shines a spotlight on how man