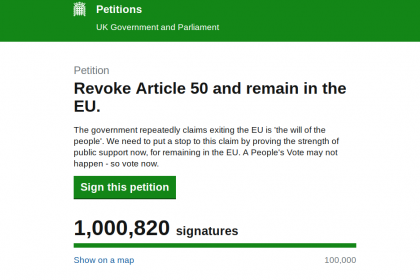 Over a million people have now signed the Parliamentary petition pleading for Article 50 to be revoked.

The parliamentary petition website crashed repeatedly today as Remainers rushed to sign a plea for Article 50 to be revoked.

The overwhelming support means the petition must be considered for debate in the Commons, but possibly not until after the UK has left the EU.

“The government repeatedly claims exiting the EU is ‘the will of the people’,” the petition reads. “We need to put a stop to this claim by proving the strength of public support now, for remaining in the EU. A People’s Vote may not happen – so vote now.”

Meanwhile European leaders are reportedly only going to allow Theresa May’s extension to continue until the 22nd May.

Journalists in Brussels have got their hands on the draft document to be discussed tonight that says the  EU will agree to a short extension of Article 50 to 22nd May “provided the Withdrawal Agreement is approved”.