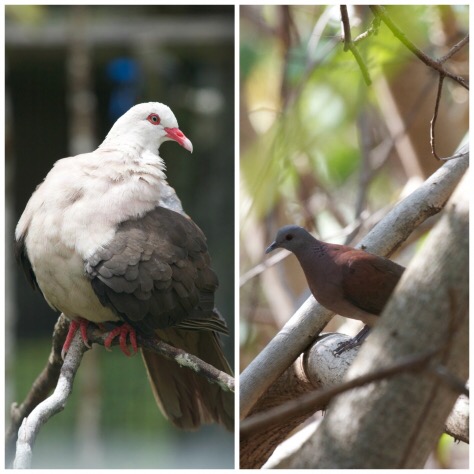 Efforts to save a critically endangered bird species could be hampered by ‘signal jamming’ coos that trick them to think they are surrounded by rivals according to Manchester researchers.

The pink pigeon is only found on the tropical island of Mauritius, famous for its iconic extinct relative, the dodo.

It was brought back from the brink of extinction and has recovered from a population of just nine in 1990 to approximately 400 in 2013. But the birds remain endangered despite decades of conservation effort by the Mauritian Wildlife Foundation (MWF).

Now though, new research from Manchester Metropolitan University (MMU) suggests that calls from an invasive bird species could be inadvertently stopping the rare pink pigeon’s population from growing,

The findings! published in Animal Behaviour journal, shows that the pigeons cannot discriminate between their own calls and those from its sister species, the Madagascan turtle dove.

Its range is restricted to the Black Gorge National Park on the south coast of the 2,040 km² island and it is not fully clear why it fails to recolonise the rest of the island.

When calls from two species are similar and individuals mistakenly respond to the wrong species, referred to as signal jamming, it may lead pink pigeons to believe they are surrounded by a greater number of rivals than is actually the case.

MMU lead researcher and PhD student Andrew Wolfenden, who published the paper with senior lecturer in Biology and Conservation Ecology Dr Selvino de Kort and colleagues from the MWF, said: “The pink pigeon is the last remaining endemic pigeon species on Mauritius after the demise of the dodo and the blue pigeon.

“Intensive conservation schemes helped the population to grow but efforts to encourage the bird to establish new habitats failed and it is unclear why.
“Signal jamming could be causing this by confusing the pink pigeons, possibly having a series of knock-on effects. Hopefully these results will contribute to safeguarding the enigmatic pink pigeon on Mauritius.”

As pigeons use their coos for attracting mates and repelling rivals, when the pink pigeons respond to the dove’s call they may waste time and energy.
This will have a negative impact on breeding success and potentially restrict opportunities to establish a territory, which they wrongly believe are occupied by rivals.

It is thought that the Madagascan turtle dove was brought to Mauritius in the late 1700s by trading ships and is thus an invasive species.
By playing pre-recorded coos through remote controlled speakers and analysing the pigeon’s response for his MSc project, Andrew provided the MWF with a possible answer as to why the pigeons do not thrive.

Free horseboating on the Rochdale Canal