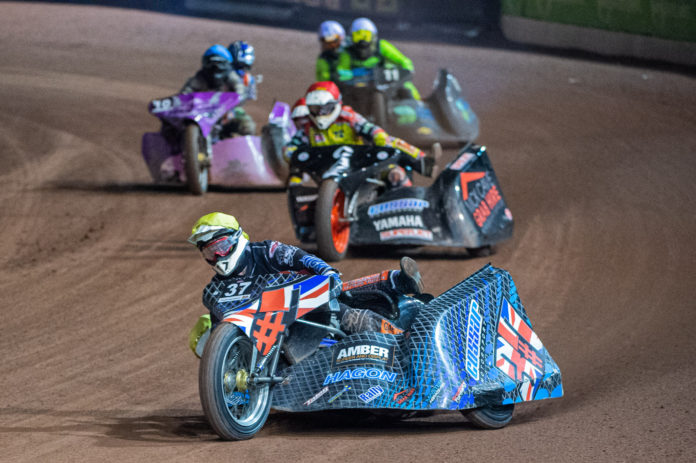 And it was the powerful No.37 machine of Mark Cossar and his passenger Carl Blythe who crossed the finish line to take a perfect victory.

The popular sidecar speedway outfits were greeted with enthusiasm after a two-year absence from Belle Vue’s prestigious track, and they repaid the crowd with a brilliant night.

First-placed Cossar dominated the scores with a flawless five-ride 15-point maximum to take the win, almost mirroring his performance in 2017; when he also took a comprehensive win.

And he did it on a brand-new, untested machine that immediately gelled with conditions on the night, just pipping Matthew Tyrell and passenger Liam Brown to the post by one point.

Tyrell and Brown also went through the card unbeaten, but for their defeat by Cossar in the final, while Mick Cave and passenger Bradley Steer came through to take third spot.

It had been quite a journey for Cave and Steer, the former of whom had just returned from a five-year absence and the latter of which was new to the team. But again, it just clicked.

It was also confirmed on the night that the Cool Running colts would face the Leicester Cubs on Friday October 25 in the home leg of their Knock Out Cup Grand Final.