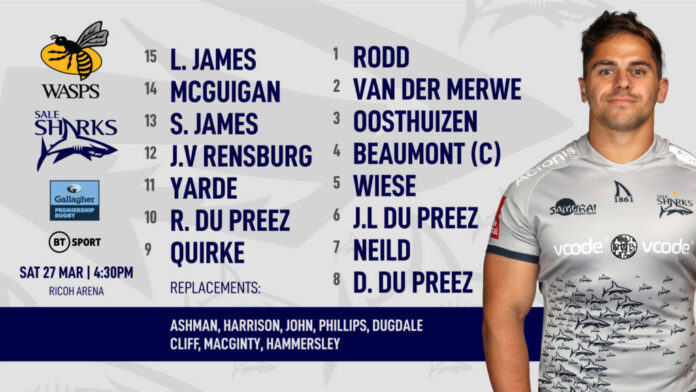 Sale Sharks have named their side to face Wasps Rugby in round fifteen of the Gallagher Premiership. The Sharks make six changes ahead of their trip to the Ricoh Arena, as Director of Rugby Alex Sanderson hands scrum half Raffi Quirke his maiden first team start after a string of impressive cameos in recent weeks.

After a dominant display against London Irish in round fourteen, an unchanged front-row of Bevan Rodd, Akker van der Merwe and Coenie Oosthuizen will look to provide a platform for an exciting Sale XV on Saturday. Josh Beaumont remains at lock and captains the side in the absence of Jono Ross.

Academy graduate Raffi Quirke is handed his full club debut by Alex Sanderson after a string of electrifying performances in the Gallagher Premiership, the 20-year-old scrum half partners with Robert du Preez to marshal an experienced Sale back line.

Springbok powerhouse Rohan Janse Van Rensburg makes his highly anticipated return to action for Sale at the Ricoh and is joined by the mercurial Sam James in the midfield. The pair have an experienced back three of Byron McGuigan, Marland Yarde and Luke James as options outside them.

Ewan Ashman returns from Scotland’s Six Nations training camp to take his place as a replacement on Saturday. He joins club stalwart Ross Harrison and Will-Griff John as front-row cover. James Phillips and Sam Dugdale provide further cover for the pack. Will Cliff, AJ MacGinty and Simon Hammersley provide a wealth of experience coming from the bench to cover the backs.