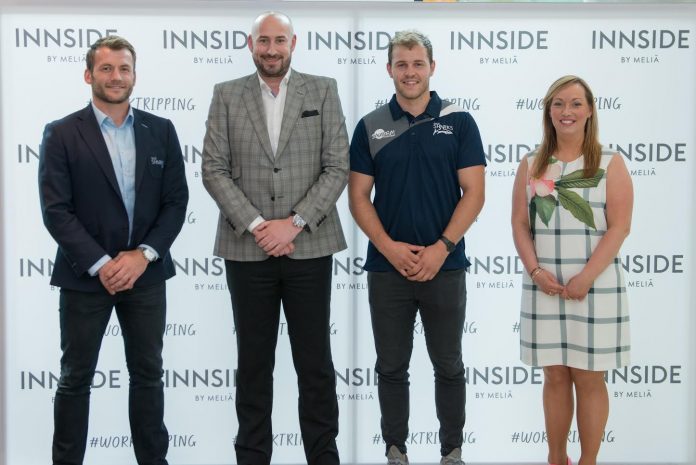 The north west’s only premiership rugby union team has confirmed that it’s renewing its official partnership with INNSIDE Manchester.

The city centre hotel at First Street has been the club’s official hotel partner since early 2016, hosting club events and opposing rugby teams.

INNSIDE Manchester will also sponsor the club’s player of the year, 24-year old Will Addison, throughout the upcoming 2017/18 Premiership Rugby season.

Addison, who plays centre, has made 97 appearances for Sale Sharks to date.

Adam Munday, General Manager at INNSIDE Manchester, said: “We are excited to be renewing our partnership with Sale Sharks for the upcoming season, and particularly proud to be supporting Will.

“We’ve hosted an array of rugby teams at the hotel over the last 12 months, including Edinburgh and Toulon. Thanks to our relationship with Sale Sharks, rugby teams playing at the AJ Bell Stadium are benefiting from INNSIDE Manchester’s fresh food offering, fitness suite and spa, and city centre location.”

He added: “Our hotel culture shares a lot of similarities with rugby, including respect, teamwork and collaboration, which is why we have such a strong partnership with Sale Sharks.”

INNSIDE Manchester hotel is one of over 50 corporate partners now working with Sale Sharks.

Mark Cueto MBE, Sale Sharks Commercial Director and Club Ambassador, said: “The club’s relationship with INNSIDE Manchester as our official hotel partner works incredibly well, so we’re delighted that Adam and the team have taken the decision to renew their partnership with us this year.

“After speaking to the club managers from some of the teams we’ve played on home turf this year, both players and team management have been really pleased with their experiences at INNSIDE Manchester. We recognise how important it is for professional players to feel relaxed, well-rested and on top of their game before a match day. INNSIDE Manchester ticks every box for us.”